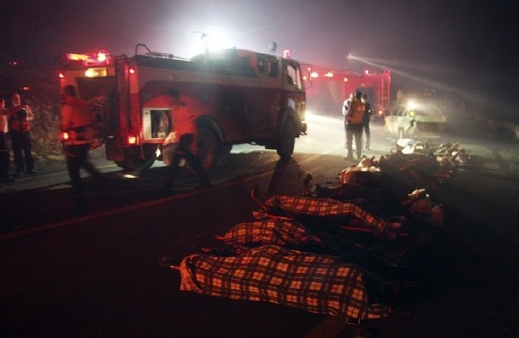 As the fires continue to consume more areas in Al Karmel, and with 41 residents dead, 14.000 evacuated from their homes, and more than 20.000 Dunams burnt, Israeli sources stated that controlling the fires could take at least several days while the devastating environmental effects of the fires could last 20 -40 years.Several Arab and Jewish areas had to be evacuated due to the spread of the fire, and all students were evacuated from their dorms at the Haifa University. At least eight of the killed are member of the Druze population in the north.

Initial reports revealed that the fire started in an area close to Esifya, and then spread with the help of eastern winds.

Despite the fact that Israel did not ask Ankara to help due to tension between the two countries, Turkey offered to send to planes to help in extinguishing the fires.

Four planes sent by France, and two planed jointly sent by Russia, Spain and Croatia also headed to the area.

Israeli daily, Haaretz, reported that Egypt also offered to send a chopper and Jordan is also expected to send truck filled with special materials to help in controlling the fires.

Haaretz added that seven fire-fighting planes landed in Israel, on Friday morning, and that more international aircraft is expected to land soon as the fires continue to spread in the north of the country.

Furthermore, 4 planed sent by Greece, one by Cyprus, and one by Azerbaijan landed in Israel, while two Turkish planes are expected to land soon.

As massive evacuation continues, so far more than 15.000 residents, including 600 prisoners, were evacuated.

The fires spread from the Carmel plateau to reach Carmel, the third largest city in the country.

By Friday morning, the number of casualties arrived to 41; most of them were killed when a bus filled with students of Israel’s Prison Service Guards flipped due to the fire while driving to Al Damon Prison to evacuate the prisoners.

The bus caught fire after it was trapped by flames when a fallen burnt tree blocked the road, 36 were killed in the incident while others died while attempting to rescue them.