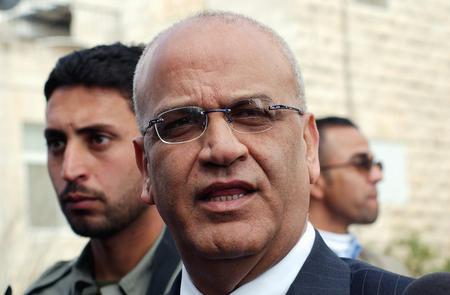 With regard to a pre-Christians reception that the Israeli government has organized in East Jerusalem on December 6, Chief Palestinian Negotiator Saeb Erakat denounced on Thursday that ‘the Israel Ministry of Tourism has hijacked Christmas for political purposes.’ The reception, which will host diplomats, heads of churches and other community members, as a showcase to advertise the Christmas period is, according to the Palestinian official, a contravention of international law.

Erekat stressed in a statement Israeli government’s contradiction of organizing a Christian event when its plan is to ‘make Jerusalem an exclusive Jewish city,’ and added that the cabinet’s real intention is to distract the world from its policies of dispossession against the Palestinian people.

‘They host events to celebrate Christian holidays, while they continue isolating Jerusalem from the West Bank neighbors, holy sites and religious networks through the construction of the Wall and the expansion of settlements surrounding Bethlehem, including Har Homa and Gilo,’ the official said.

In addition, Erekat also stated he seeks ‘an open Jerusalem as the capital of two states, where free access to all holy sites is guaranteed,’ and concluded that Christmas should be an example of good will and not used to deepen the separation of the holy land, Maan reported.