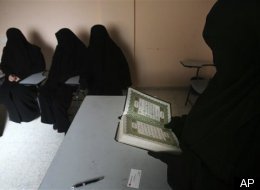 Hamas Prime Minister Haniyya firmly declared that there is no al-Qaeda in Gaza but also denounced a new group of extremists is rising, the Associated Press reported on Thursday.
The Prime Minister of the deposed government of Gaza, Ismail Haniyya , spoke at a rare news conference for foreign reporters, on Wednesday. He rejected claims of an al-Qaeda presence in Gaza, warning of an Israeli manipulation policy to further decry the group and possibly justify action against the coastal region under the guise of global war on terror.

Haniyya stated: ‘There is no such thing as al-Qaeda in Gaza…The Palestinian resistance does not work outside the borders of Palestine.’ While al-Qaeda’s fight is directed against the West, Hamas proclaims its sole target is Israel.
At the same time, the Hamas Prime Minister claimed zealots are increasingly emerging as a threat to Gaza’s ruling Islamic militants.

Hamas’ rivals called Jihadi Salafis, according to experts, are known to be a few hundred armed men, organized into many small armed groups who promote global holy war and follow a form of Islam even more conservative than that of Hamas.

These groups have reportedly clashed with Hamas forces and sporadically fired rockets at Israel defying Hamas’ informal truce, set since Israel’s war on Gaza two years ago. They also allegedly planned to cross into Egypt to launch attacks against Israelis and foreigners.

Hamas asserted it dismantled the groups after a mosque firing in August 2009 where 26 people died. However, a few months later Jihadi Salafis came to the fore again. In the last few weeks, they resumed rocket fire on Israel and blasted the car of a Hamas leader outside his home in Gaza. ‘We will not stop targeting the figures of this perverted, crooked government (Hamas), breaking their bones and cleansing the pure land of the Gaza Strip of these abominations…What will come next will be harder and more horrible.’ said the group.

The Salafis oppose Hamas for failing to impose Islamic law since and for maintaining a ceasefire with Israel. They claim gaining a growing influence amongst the impoverished and isolated population of Gaza, alarming they could become a direct ally to al-Qaeda from which they are inspired to join global jihad.

Also known as ‘Army of Islam’, the group began attracting attention after Israel’s withdrawal from the Gaza strip in 2005. They placed pipe bombs outside Internet cafes, attacked Christian institutions and kidnapped many foreign journalists.

Egyptian officials say in the first week of November, they arrested 25 supporters of the Army of Islam. Last month, Israel killed three members of the armed group in separate airstrikes. It wasn’t clear whether the cell was planning to kidnap Israeli and American tourists in Egypt’s Sinai Peninsula or use Egypt as a gateway to enter Israel to carry out attacks there.

A number of Gaza fighters from the same cell, who got military training in Sudan and Yemen, are still hiding in the Sinai, a senior Israeli military official told AP this week. The official also alleged that hundreds of militants, mainly from Yemen and including some trained by al-Qaeda, have infiltrated into Gaza.

Prime Minister Haniyya reportedly sent a letter to the Egyptian intelligence chief, Omar Suleiman, to assure him that Palestinian militants are not active outside Gaza.
Hamas and the Gaza Salafis have been urged by commentators on websites affiliated with al-Qaeda to clearly set their differences.

Hamas has traditionally focused on its battle against Israel as an occupier of Palestine, and rebuffed the notion of global holy war. In the last few years, some officials in Hamas, including supreme leader Khaled Mashal, have stated they would not oppose a Palestinian state alongside Israel after years of total objection.

In a statement released on Thursday, Haniyya said that Hamas would accept a sovereign Palestinian state in the 1967 borders, with Jerusalem as its capital, as long as all Palestinians decide through a public referendum on a peace deal with Israel.

The Salafi movement, which is taking root in Gaza, has grown throughout the Middle East, adhering to an ultraconservative Islam similar to Saudi Arabia’s, strictly segregating the sexes and interpreting religious texts literally. Salafis are typically non-political, but a small jihadist stream embraces the al-Qaida call for holy war against the West and moderate Arab leaders although they are not formally affiliated with it, according to a study by the Washington Institute for Near East Policy.

Hamas, on the other hand, solely concentrates its efforts on a Palestinian state, considers Israel its only target of attacks, and makes compromises with other movements, including participating in Palestinian elections in 2006.

During the 2006 general elections, the Hamas movement garnered a vast majority but Israel, the United States and their allies blocked the formation of a government dominated by Hamas and Israeli kidnapped and imprisoned elected Hamas legislators and ministers.