Argentina Recognizes Palestine Within its 1967 Borders 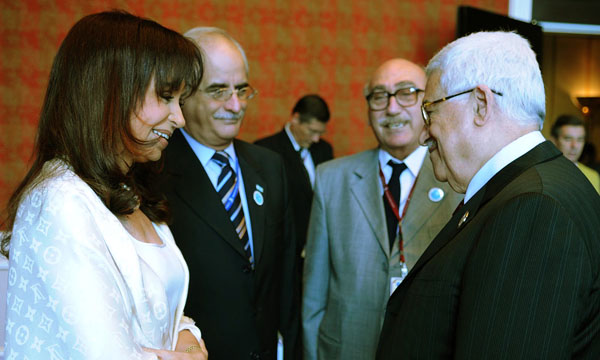 After Brazil’s decision to recognize a Palestinian state within the 1967 borders, the President of Argentina, Cristina Fernandez de Kirchner, confirmed, on Sunday, that she would also recognize an independent Palestine with the same parameters. Israel defines it as a ‘regettable.’The announcement was made by a phone call to the Palestinian President Mahmoud Abbas in which Kirchner added that that her recognition was not just a political gesture, but a moral stand.

On Monday, the General Secretary of the Palestine Liberation Organization, Yasser Abed Rabbo, said that Argentina’s gesture is a sign that the previous decision made by Brazil has encouraged other Latin American countries and hoped also other countries may add.

Brazil announced its official recognition of a Palestinian state on December 3, responding to a request sent by Abbas on November 24, through a letter from the Brazilian President Luiz Inácio Lula da Silva to Abbas. Lula stressed ‘the need to achieve the legitimate aspirations of the Palestinian people and to create a secure, democratic and economically viable state, coexisting in peace with Israel.’

Brazil and Argentina suffered recrimination from the Israeli foreign ministry and several American congressmen, who consider that the Palestinian state cannot be declared unilaterally, but through the Israeli-Palestinian peace talks, which now are in a stand by.

The Israeli Foreign Ministry spokesman Yigal Palmor told AFP on Monday that the announcement of recognition is a regrettable decision and that ‘it will not help at all to change the situation between Israel and the Palestinians.’

In addition, Palmor claimed that ‘It is a disappointing declaration which goes against the spirit of the agreements between Israel and the Palestinians and against negotiations for peace.’

More than 100 countries have already recognized an independent Palestine within its ’67 borders, including all Arab countries, most African nations and part of the new Asian economic potencies, such as China and India.