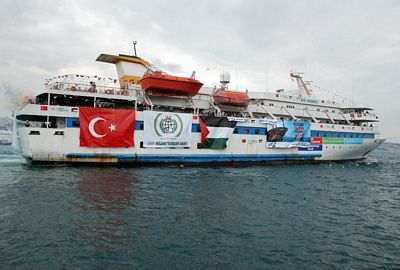 Turkish and Israeli diplomats met in Geneva on Sunday, and discussed repairing relations between the two countries cooled since after Israeli military raid on the Gaza flotilla last May, Ha’aretz said.Turkish Foreign Ministry Undersecretary, Feredin Sinirlioglu, and Israeli diplomat, Joseph Ciechanover, met in an attempt to draft an agreement between the two nations. The meeting comes after Israeli Prime Minister Netanyahu called his Turkish counterpart Erdogan thanking him for offering help in the wake of the recent forest blaze in northern Israel.

Nevertheless, Erdogan clarified that the firefighting aid is merely humanitarian and that Turkey still expects a full apology and compensation in connection with the May 31 flotilla assault by Israeli commandos in which nine Turkish activists killed.

The conditions set for any agreement are believed to be an Israeli apology and compensation in exchange for the return of a Turkish ambassador to Tel Aviv and the Israeli counterpart to Ankara.

Israeli Foreign Minister Lieberman however has voiced in the past opposition to any apology or compensation for the incident.

In the night of May 31, Turkish Mavi Marmara, part of a flotilla of aid boats bound to the Gaza Strip, was raided in international waters by Israeli forces. The attack led to the deaths of nine Turkish nationals.