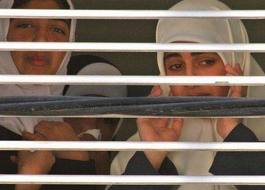 Palestinian human rights center Ahrar slammed Israel for renewing the administrative detention of Kifah Jibril just few hours before her scheduled release, the Palestinian Information Centre said. The director of Ahrar center for prisoners’ studies and human rights, Fuad al-Khafsh, stated on Monday night that the Israeli intelligence renewed the detention of Kifah, after four months of administrative custody without trial or charge.

Al-Khafsh also said that Kifah’s detention was renewed for a similar period of time in spite of deterioration of her health condition, explaining that she was suffering from a rare disease which causes tightening of the arteries obstructing regular flow of blood to her limbs. Kifah is also believed to suffer from breathing difficulty.

The Ahrar Center held Israel fully responsible for the life of the Palestinian woman warning that she is in great danger. The center’s director condemned the captivity, adding that she is one of the active social figures in Ramallah and el-Bireh.

Khafsh called upon international organizations and human rights groups to rapidly urge the immediate release of Kifah and provide her with the necessary medical treatment.

Kifah Jibril, from Ramallah, a mother of two children, has held in the Maskobeh detention center since 1 August of this year after being subjected to severe interrogation.