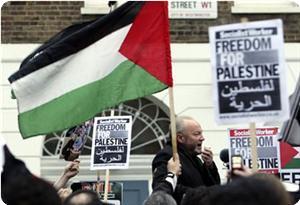 Former British M.P. George Galloway promised, publicly, that new humanitarian aid convoys would be sent next year via land, air, and sea to the Gaza Strip to break the four-year long Israeli blockade, the Palestinian Information Center reported. Galloway told Algerian daily al-Shaab, at a press conference on Monday, that a plane would carry and deliver by land humanitarian aid to Gaza.

Galloway, known for having led several Gaza-bound aid convoys, asserted that humanitarian activists would attempt to to break the siege next year by land, air, and sea.

He addressed the Arabs, and especially governments, urging them to support the planned relief mission. He also expressed regrets over the Arabs’ ‘negative position and weak commitment’.

The former British MP also anticipated a plan to visit to the U.S. to speak about the Palestine plight, adding that he has already taken part in 12 seminars regarding the same [humanitarian] cause in Canada.

There are fears that the convoy be aggressively confronted by Israel’s military. Last May 31, nine Turkish activists were killed by Israeli commandos, in international waters, on the Turkish-sponsored aid boat Freedom Flotilla while trying to reach the coastal enclave.