Gaza Border Opened for the Weekly Imports and Exports 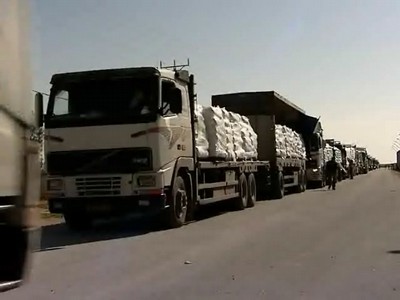 The Palestinian liaison official Raed Fattouh stated, on Tuesday, that Gaza’s southern crossing, Kerem Shalom, was opened for entry of humanitarian aid, fuel and commercial goods and for the limited export of strawberries and flowers, Ma’an News reported.Fattouh informed that within the imports, 160-170 truckloads of goods, including three truckloads of construction material for UN-run projects would be delivered, as well as limited quantities of domestic-use gas and industrial-grade diesel.

According to Fattouh, two truckloads of strawberries and flowers harvested in the coastal enclave would also cross the border to be sold outside, under the auspices of a Dutch-government program.

However, another import, which was supposed to cross in the north with bulk transport of wheat, animal feed and construction aggregates, was closed despite warnings from UN officials about a looming wheat crisis.

Since the Israeli-imposed siege of Gaza, the weekly crossing operations of humanitarian aid are strictly controlled by the Israeli military.