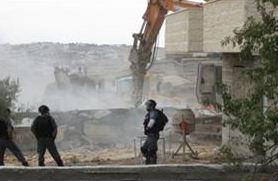 For the second time this year, Israeli soldiers demolished, on Wednesday morning, hothouses, removed tents and demolished a three room school, that was currently under construction, in Tana area, east of the northern West Bank city of Nablus.Ghassan Douglas, in charge of settlements file in the northern part of the West Bank, stated that a number of Israeli military vehicles invaded the area, located 7 kilometers away from Beit Forik near Nablus, and demolished the structures after declaring the area as a closed military zone.

Douglas added that the soldiers demolished 12 hothouses and removed a tent that was donated by the International Red Cross, and also demolished a school constructed by the Palestinian National Authority.

This is the second attack of its nature in the last 14 months, he said.

Atif Hanani, head of the Beit Forik City Council, stated that soldiers informed the residents that they are implementing orders issued by the Israeli High court.