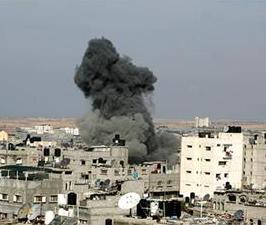 According to the report, 1,273 residents were wounded in the West Bank and the Gaza Strip in November.

The army carried out nine limited invasions into the Gaza Strip in November, 84 in the West Bank, and kidnapped 288 Palestinians; 100 of the kidnapped are from Hebron.

The report also stated that there are 6,100 Palestinians currently imprisoned by Israel, among them 40 women, 251 children, 10 legislators and 214 detainees who are imprisoned under administrative detention orders.

It also stated that immediately after the temporary settlement freeze ended on September 26, settlers started an accelerated construction process in Jewish settlements in the occupied West Bank, including 56 units in Hebron.

Furthermore, Israeli soldiers confiscated 200 Dunams of Palestinian lands to annex them to the Maskiot Settlement in the Jordan Valley.

Israeli settlers burnt more than 200 Olive trees in the West Bank, while soldiers demolished a mosque in the Jordan valley.

Violations in Jerusalem remain on the rise as Israel presented a plan to build hundreds of units for Jewish settlers, including 1,200 units on Abu Ghneim (Har Homa) Mountain, 250 units along with a Mall in Ramot settlement, and dozens of settlement projects in different areas in the occupied West Bank and in occupied East Jerusalem.

After several months of attempted negotiations with Israel to try to push Tel Aviv to comply with international law and signed agreements, the U.S. government announced, Tuesday, that it is abandoning efforts to get the Israeli government to comply with the law prohibiting settlements.

According to a representative of the US State Department, the US will continue its negotiations, but will not press Israel to comply with international law banning the transfer of civilians to militarily occupied land. All settlements are illegal under the Fourth Geneva Convention, to which Israel is a signatory, but the Israeli government has ignored this obligation, and has transferred over 500,000 Israeli civilians into settlements constructed on stolen Palestinian land since 1967.

Previously, the U.S. government had offered Israel 20 F-35 fighter jets, which are the newest model of US-made fighter jets, in exchange for a six-month settlement freeze. Israel rejected that offer, and demanded that they be allowed to continue continual expansion of settlements on Palestinian land, even while engaging in ‘negotiations’ with Palestinian leaders.