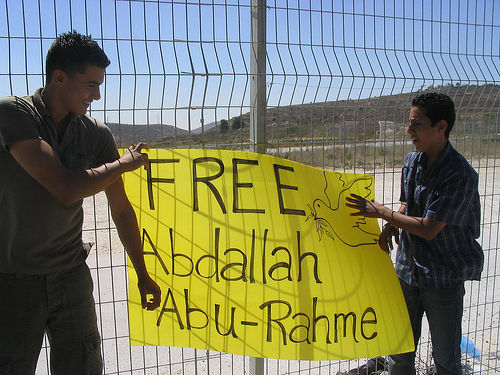 Abdullah Abu Rahme was brought to an Israeli court Monday, after completing a one year prison sentence for ‘incitement’ due to his role organizing non-violent weekly demonstrations against the Wall. Israeli authorities are attempting to extend his sentence indefinitely without charges, a policy known as ‘administrative detention’, which is considered a violation of international law, but is common practice by Israeli military courts.The courtroom was packed with Abu Rahme’s supporters, including a number of European politicians, members of the European Union and British consul general, Vincent Fean. South African Archbishop Desmond Tutu has spoken out on the case, publishing a letter supporting Abu Rahme and condemning his imprisonment, calling it an example of apartheid-like practices by Israel.

39-year old Abdullah Abu Rahme is a schoolteacher from the town of Bil’in, in the central West Bank, who joined with other town leaders to organize a non-violent resistance movement when Israel began construction of the Wall in 2004 on village land, confiscating half of the village’s land.

Their weekly protests include singing, street theater, puppetry and art, and include Israeli and international peace activists. Israeli troops, every week, attack the marches with experimental CS gas, sewage water, blue dye, rubber-coated steel bullets, and other so-called ‘non-lethal’ experimental weapons. Over twenty protesters have been killed in non-violent demonstrations in Bil’in and other villages, half of them children. Dozens more have been wounded, including international supporters like Nobel laureate Mairead Maguire and U.S. peace activist Tristan Anderson.

Originally, Abu Rahme had been charged with ‘possession of a weapon’, for an art display he had made out of spent tear gas canisters fired by Israeli troops at demonstrators, shaping them into a peace sign. Those charges were eventually dropped, but he was charged with ‘incitement’, and has served a year in prison for that charge.

Israeli officials say they want to keep Abu Rahme in prison for unspecified ‘security concerns’, despite their failure to present any evidence against him. Abu Rahme’s lawyer, Gaby Lasky, told reporters that she believes the arrest and imprisonment of Abu Rahme is politically motivated. She said, ‘Since the state has not been able to break the nonviolent demonstrations (by force), it has decided to break them in legal terms, trying to keep the leaders behind bars.”

In addition to the non-violent demonstrations, Abu Rahme also helped organize a lawsuit challenging the route of the Wall, which confiscates half of the village’s land. The lawsuit was successful, but Israel has not enforced the ruling, and the Wall has continued to be constructed through the middle of Bil’in’s land.