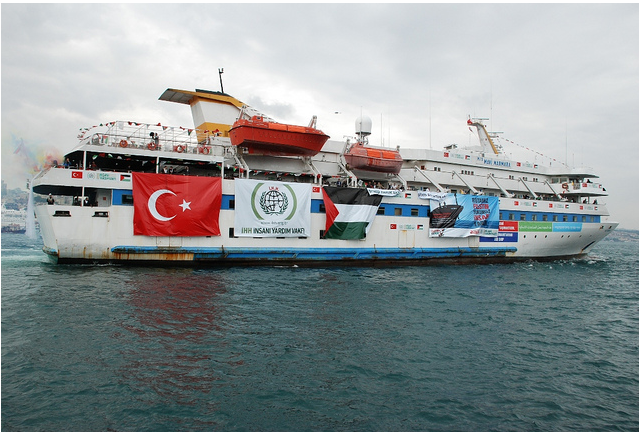 The Israeli government made an offer to pay thousands of U.S. Dollars to the families of the of the nine Turkish citizens who were killed during the Israeli violent military attack on the Mavi Marmara Turkish solidarity ship last May. Yet, Israel is refusing to offer apologies or accept responsibility for the deadly attack.The move was not considered as an admission of guilt by the government as the offer states that the compensation would be paid as a ‘humanitarian gesture, and not as an admission to guilt’.

Turkey is demanding an official apology and compensation from Israel in order to mend the relations between Ankara and Tel Aviv, but Israel is refusing to admit responsibility for its deadly attack.

The Israeli government sent a memo in this regard to Turkey, while Turkish Prime Minister, Recep Tayyip Erdogan, held a meeting with senior advisers to discuss the letter.

Financial compensation does not seem an issue to Tel Aviv as it is offering thousands of dollars to the families of the slain activists and smaller amounts to the wounded.

The main issue is that Israel is refusing to admit guilt or accept any legal responsibility for the attack due to fear of prosecution at international courts, and due to political considerations.

According to the Turkish daily Huriyat, Turkish Ambassador to the United States, the former ambassador to Israel, Namik Tan, held a meeting in Geneva earlier this week with Israel’s U.N. envoy, Yosef Ciechanover.

The undersecretary of the Turkish Foreign Affairs Ministry, Feridun Sinirlioglu, updated the Turkish Prime Minister on the contents of the meeting.

Currently, Tan is holding talks with his Israeli counterpart in Washington, Michael Oren, in what was described as ‘an attempt to mend the relations between the two countries’.

Haaretz stated that it is still unclear whether the Turkish Prime Minister, Recep Tayyip Erdogan, has authorized the talks to continue, but sources in Ankara stated that more meetings are set to take place in the coming days.

Haaretz added that former Israeli Prime Minister, Ehud Olmert, who had to resign due to corruption charges, slammed the Israeli plan to pay compensation for the families of the Turkish victims of the Israeli raid on the flotilla.

He said that his government managed to keep the blockade on Gaza, and managed to prevent solidarity ships from reaching it, ‘while the current government of Netanyahu is offering apologies’.

On his part, Israeli Prime Minister, Benjamin Netanyahu, has instructed his advisers to refrain from commenting on the position of Foreign Minister, Avigdor Lieberman, who expressed total rejection to any compensation.

Furthermore, Vice Prime Minister, Silvan Shalom, said that Israel should not offer any apology or compensation.