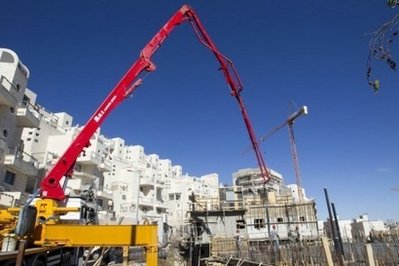 Israeli forces conducted 36 incursions into Palestinian communities in the West Bank this week, during which they abducted 10 Palestinian civilians, including a child and a woman.

In one example of this week’s 36 incursions, on Monday December 6th, approximately 22:30, Israeli forces moved into Beit Liqya village, west of Ramallah. They patrolled in the streets and provoked Palestinian civilians. A number of Palestinian boys gathered and threw stones at Israeli military vehicles. Immediately, Israeli soldiers fired bullets, tear gas canisters and sound bombs at them. A number of civilians suffered from tear gas inhalation.

In another example, on Tuesday, 07 December 2010, at approximately 02:00 am, Israeli forces moved into the eastern part of Hebron. They raided and searched a number of houses and abducted Bahaa’ ‘Abdul Majid Abu Mayala, 27, and his wife, Hanadi Ya’qoub Abu Mayala, 23.

Israeli forces expelled a member of the Palestinian Legislative Council from East Jerusalem. On Wednesday, 08 December 2010, Israeli occupation authorities expelled Sheikh Mohammed Mahmoud Abu Tair, 54, Member of the Palestinian Legislative Council (PLC) from the Change and Reform Bloc, from East Jerusalem to Ramallah, a few hours after an Israeli court had ordered his expulsion. PCHR condemns the expulsion of Sheikh Abu Tair, and believes that the expulsion decision amounts to forcible migration, which is prohibited under article 49 of the Fourth Geneva Convention. PCHR calls upon the international community to intervene in order to sop illegal transfer of Palestinian civilians from occupied Jerusalem, and to take action to stop the escalation of arbitrary measures taken by Israeli forces against the Palestinian civilians population in the Occupied Palestinian Territories.

On Friday morning, 03 December 2010, Israeli forces imposed additional restrictions on the movement of Palestinian civilians. They reinforced their presence at military checkpoints at the entrances of the city, and patrolled in the streets. They stopped young men wishing to pray in the al-Aqsa Mosque and held their identity cards until the end of the Friday Prayer.

In the afternoon, Israeli forces declared in the media that bodies of two persons whom they killed were near the border in Jabalya. Following coordination with Israeli forces through the International Committee of the Red Cross, at approximately 15:00, two ambulances of Palestine Red Crescent Society moved towards the area, but they were not able to attend the victims as the Israeli forces in the area refused to allow the ambulances to reach the area. They moved towards the area again at approximately 17:30. Medical crews searched for the body until they found them at approximately 20:30 nearly 100 meters away from the border. The bodies were severely distorted by the shells.

The same night, at approximately 03:45, Israeli forces moved nearly 200 meters into ‘Izbat ‘Abed Rabbu area in the east of the northern Gaza Strip town of Jabalya. They leveled areas of Palestinian land, which they had already razed. They withdrew from the area a few hours later, and no casualties were reported.

On Friday December 3rd, At approximately 10:10 am, Israeli soldiers positioned on observation towers on the border between the Gaza Strip and Israel to the northwest of Beit Lahia town opened fire at a number of Palestinian workers who were collecting scraps of construction materials from a site on which the evacuated Israeli settlement of ‘Elli Sinai’ used to stand. As a result, ‘Alaa’ Nafez Barakat, 21, from al-Shati refugee camp west of Gaza City, was wounded by shrapnel to the feet, when he was nearly 400 meters away from the border.

In addition, Israel has continued to impose a total siege and has isolated the Gaza Strip from the outside world.

On 02 December 2010, a number of Israeli settlers from ‘Halmish’ settlement, which stands on lands of the villages of Nabi Saleh, Beit Reema, Deir Nizam and Deir Ghassana, northwest of Ramallah, gathered at the entrance of Nabi Saleh village and attempted to invade the village.

On 05 December 2010, a number of Israeli settlers from ‘Qidoumim’ settlement, east of Qalqilya, tried to destroy a tract of agricultural land belonging to Mohamed Fat’hi ‘Omar, from Kufor Qddoum village.

On 08 December 2010, Israeli forces, accompanied by two bulldozers and a number of jeeps of the civil administration and the higher organization council, moved into Khirbat Tana area to the east of Beit Fourik village, east of Nablus, and declared it a closed military zone. They soon demolished the school of the area, two houses and two awnings.

Following the Friday Prayer on 03 December 2010, dozens of Palestinian civilians and international and Israeli human rights defenders organized a peaceful demonstration in protest to the construction of the Annexation Wall in Bil’in village, west of Ramallah. They moved towards the annexation wall. Israeli soldiers stationed in the area fired rubber-coated metal bullets, sound bombs and tear gas canisters at the demonstrators. As a result, a number of demonstrators suffered from tear gas inhalation and others sustained bruises as they were beaten by Israeli soldiers.

Also following the Friday Prayer on 03 December 2010, dozens of Palestinian civilians and international and human rights defenders organized a peaceful demonstration in Ne’lin village, west of Ramallah, in protest against the construction of the Annexation Wall. They clashed with Israeli troops positioned near the Wall. Israeli troops fired rubber-coated metal bullets, sound bombs and tear gas canisters at demonstrators. As a result, dozens of demonstrators suffered from tear gas inhalation, and others sustained bruises.

Also following the Friday Prayer on 03 December 2010, dozens of Palestinian civilians and international and Israeli human rights defenders organized a peaceful demonstration in Nabi Saleh village, northwest of Ramallah, in commemoration of the late Palestinian President Yasser Arafat, and in protest against land confiscations in the Wad al-Raya area between the villages of Nabi Saleh and Deir Nizam. When the demonstrators attempted to reach areas of land seized by Israeli settlers near ‘Halmish’ settlement, Israeli troops fired rubber-coated metal bullets, sound bombs and tear gas canisters at them. As a result, two demonstrators were wounded: Rami Hussein Tamimi, 32, wounded by a rubber-coated metal bullet to the head; and Ta’min Mohammed Tamimi, 28, hit by a tear gas canister to the head.

A number of demonstrators also suffered from tear gas inhalation.

Due to the number and severity of Israeli human rights violations this week, the PCHR made a number of recommendations to the international community. Among these were a recommendation that the European Union activate Article 2 of the Euro-Israel Association Agreement, which provides that Israel must respect human rights as a precondition for economic cooperation between the EU states and Israel. PCHR further calls upon the EU states to prohibit import of goods produced in illegal Israeli settlements in the Occupied Palestinian Territories.

The PCHR also called on the international community to recognize the Gaza disengagement plan, which was implemented in September 2005, for what it is – not an end to occupation but a compounding of the occupation and the humanitarian crisis in the Gaza Strip.