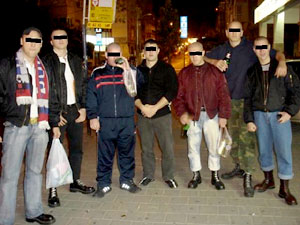 The leader of a Tel Aviv based neo-Nazi gang who eluded Israeli intelligence for years was arrested, Friday, after a Russsian investigative television show found him “living openly” as a law student in Moscow.Dmitri Bogotich led a gang of 8 members between the ages of 16 and 21 known as ‘Patrol 36’, made up of Russian immigrants to Israel who were actually neo-Nazis. The targets of their multiple hate crimes in Tel Aviv, carried out between 2005 and 2007, were not Jews, however, but Africans and other non-white immigrants, homosexuals and homeless people. They also painted swastikas on a synagogue in Petah Tikva, east of Tel Aviv.

In an interview with reporter Orly Vilnai Federbush in 2008, Bogotich bragged about how his gang beat ‘dirty blacks’ and ‘some gay guy”, and said he believed Arabs should be killed. He also talked about how he could live without fear of extradition in Russia, and that Israeli authorities had not even issued an arrest warrant for him. In fact, they had not issued such a warrant, and it was only after a Russian TV show tracked Bogotich down and exposed him as the leader of ‘Patrol 36’ that any authorities, Russian or Israeli, made an effort to arrest him.

The gang, and others like it, have been a source of embarassment for Israeli authorities, who have worked to bring in over one million Russian (and former Soviet Republic) Jews since 1991. But some Israeli officials and rabbis have questioned whether all of the immigrants are actually Jewish – one former interior minister claimed that half of the one million immigrants are not Jewish. This has resulted in discrimination against Russians inside Israel on one side, while on the other side, it has led to a right-wing movement among Russian immigrants led by current Foreign Minister Avigdor Lieberman, who believes in the expulsion of Palestinians from inside Israel.

Dmitri Bogotich served as an Israeli military officer while he was leading the gang in 2006 and 2007, working in the Occupied Territories during the day and carrying out beatings in Tel Aviv at night.

According to Israeli authorities, Bogotich will be extradited to Israel to face charges along with the other 7 members of the gang, who were arrested in Israeli shortly after Bogotich fled to Russia in 2007.