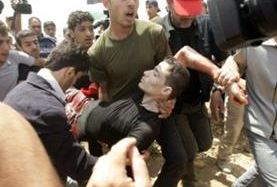 Eyewitnesses reported that Israeli soldiers, stationed at the border with the northern Gaza Strip opened fire at farmers and residents collecting wood, and wounded two of them, one seriously.Adham Abu Salmiyya, spokesperson of the Emergency Department at the Palestinian Ministry of Health in Gaza, confirmed that the two, both from Beit Lahia in the northern part of the Gaza Strip, were moved to Kamal Adwan hospital.

Abu Salmiyya described the injuries of the two residents as moderate and that they were both shot in the foot.

Furthermore, a 16-year-old child, from Khuza’a in Khan Younis, in the southern part of the Gaza Strip, was shot and wounded while working in his family’s land.

The child was moved to Nasser Hospital in Khan Younis suffering moderate wounds.