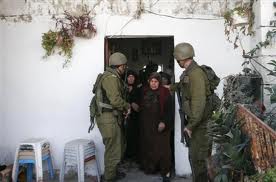 Israeli troops kidnapped, during a number of overnight invasions, five Palestinians, including three students from the southern West Bank district of Hebron, and two boys in a village near Jenin, in the northern part of the West Bank.Muhammad Ayad Awad, spokesman of the Palestine Solidarity Project, reported that Israeli military invaded Beit Ummar, north of Hebron, and detained three students after searching their homes.

Troops also invaded the town of Doura, southwest of Hebron, and detained an engineer known as Isma’il Hassan Awawda.

In addition, soldiers kidnapped Miqdad Nuwab Masalima at a roadblock located at the entrance of Beit Awla, near Hebron. Soldiers stopped his car and kidnapped him.

In the village of Zababda, west of Jenin, two Palestinian children were kidnapped by the army. The two, identified as a 15 year old Ahmed ‘Iz al-Din Shaban and Ala’ Jihad Jamal, 16, were kidnapped after the soldiers searched their parents’ homes.

Israeli troops also invaded three other villages in the Jenin area; no arrests were made.

Furthermore, Israeli online daily, Haaretz, confirmed that a total of 9 Palestinians were kidnapped over night in different Israeli military invasions across the West Bank.