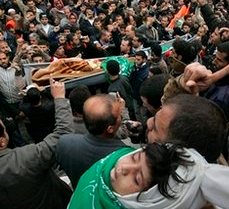 Medical sources in the Gaza Strip that the number of Palestinians killed in the Gaza Strip on Friday morning arrived at two after a wounded resident died of his woundsThe two were killed after an explosive left by the Israeli army detonated near them.
The sources added that Mo’men Hallas, 16, dies of his wounds at the al-Shifa Hospital in Gaza city, shortly after suffering serious injuries.

The first child, Montaser al-Batteekhy, 16, was immediately killed when the explosive went off.

Several Palestinians were wounded in a number of Israeli military attacks in the Gaza Strip on Friday morning.

Adham Abu Salmiyya, spokesperson of the Emergency Unit at the Palestinian Ministry of Health in Gaza in Gaza, reported that the body of Montaser al-Batteekhy, 16, was moved to Dar al-Shifa Hospital in Gaza City.

Abu Salmiyya added that the wounded resident was moved to the Intensive Care Unit due to the seriousness of his condition.

Also on Friday, three Palestinians were wounded by army fire in northern and southern Gaza.

Two of them were wounded while collecting wood north of Beit Lahia, in the northern part of the Gaza Strip.

Furthermore, a 16-year-old child, from Khuza’a in Khan Younis, in the southern part of the Gaza Strip, was shot and wounded while working in his family’s land near the border.

Soldiers do not allow the Palestinians to approach the border fence under claims of preventing infiltrations into Israel or into nearby military camps.