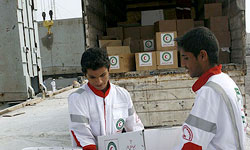 A ship organized by The Asian People’s Solidarity for Palestine, carrying 55 activists and humanitarian aid supplies arrived in Tehran while on its way to impoverished and besieged Gaza Strip.The Fars News reported that the members of the Caravan are from Pakistan, India, Nepal, Malaysia, Japan and Singapore, and that they are expected to be accompanied by activists from Turkey, Bahrain, Azerbaijan, Australia and Iran.

The Fars News added that 32 Indian activists, 8 from Nepal, Bangladesh, Malaysia, Japan and Sri Lanka, were not allowed by the Indian Border Police to cross over into Pakistan. They instead had to take a flight. The activists are hoping to deliver medical supplies and two ambulances.

On May 31, the Israeli Army attacked and boarded the Mavi Marmara Turkish solidarity ship, that was heading to Gaza to deliver humanitarian supplies, killed nine activists and wounded several others before towing the ship to Ashdod and deporting the activists later on.

Israel imposed a deadly siege on Gaza on June 2007, more than 377 patients died due to the siege that left Gaza hospitals and medical centers out of basic supplies.

Hundreds of seriously ill Palestinians are still waiting to be allowed to leave Gaza for medical treatment elsewhere.

Several human rights groups around the world slammed the Israeli siege on Gaza and considered it a form of collective punishment.