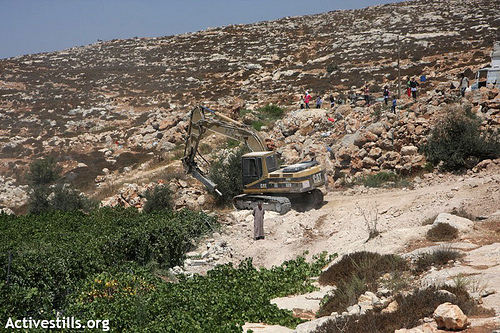 Israeli officials ordered destruction of electricity infrastructure, on Thursday, in two Palestinian villages in the southern area of Hebron, local sources said.Israeli authorities handed demolition orders to Muhammad al-Adrah, the head of the village council of Rifaya and ad-Deirat, for an electric transformer and power lines that supply electricity to 800 people in the two villages located near Yatta, south of Hebron.

The villagers are planning to mount a legal challenge to the demolition orders.

Azmi Ash-Sheiyukhi, the local Popular Committee chairman, said Israeli officials had previously authorized the construction of electric infrastructure to provide power to 400 Rifaya villagers, while residents of ad-Deirat had themselves paid for the transformer.

Palestinian residents in the southern villages near Yatta have been subject to Israeli harassment since 1981 from land confiscations for the building of five Israeli settlements in the area, to repeated home demolitions, and expropriation of livestock and fodder.

Several cases have been filed in Israeli courts, but these cases rarely decide in favor of property owners and many remain pending in the without any outcome.