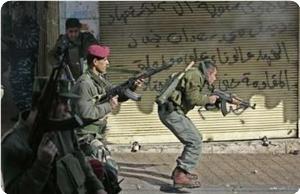 According to local sources, among the detainees were a 60-year-old leader and journalist, in Hebron, and a human rights activist in his fifties along with university students in Nablus.

Most of the Hamas members arrested were reportedly former prisoners in Israeli jails.

Relatives of Dr. Adnan Masswada, from Hebron, stated that he was taken to hospital a few hours after being detained by P.A. forces four days before. They added that Masswada had to undergo an urgent cardiac catheterization.