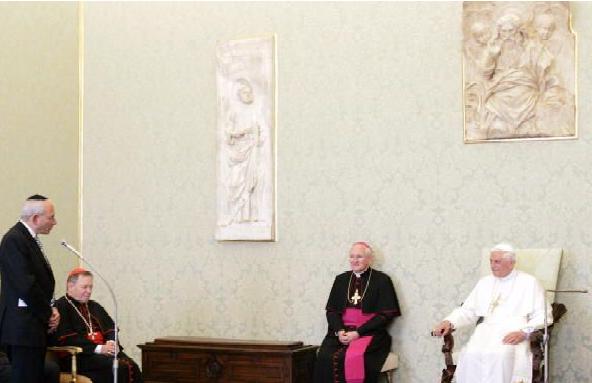 On Friday, a delegation of the World Jewish Congress leaders met with Pope Benedict XVI at the Vatican, and urged the pontiff to combat what they called as a ‘new form of anti-Semitism’, referring to criticism of Israel and its violations against the Palestinians. In a statement released to the press, WJC President, Ronald S. Lauder, said ‘We expressed to the Pope how much we value the close relationship we have enjoyed with the Vatican over many years in our quest for a secure Israel and a safer future for Jews everywhere.”

During the meeting, Jewish leaders asked the Pope to combat anti-Semitism in the Christian world, particularly citing the Jewish link to both Jews and Christian holy sites, such as the Temple Mount in Jerusalem and the Rachel’s Tomb in Bethlehem.

In addition, WJC Secretary General Designate Dan Diker asked the Catholic Church to recognize what they define as ‘the deep and historical connection of the Jewish people to the land of Israel’, and particularly called on the pope to take a leading role in the fight against the ‘delegitimization’ of Israel, which, according to WJC members, is a new ‘politically correct’ form of anti-Semitism.

The statement stressed the pope’s compromise to join forces to fight anti-Semitism in the world.

The meeting comes shortly after the latest round of talks between Israel and the Vatican regarding bilateral economic relations. On Friday, the two states released a joint statement describing a ‘good and open atmosphere’ in the talks.

The pope also sent a telegram to the Israeli Prime Minister, Benjamin Netanyahu, expressing his ‘prayers and solidarity’ with victims of the recent forest fire and valuing the dedication of the people who had worked in the rescue operations.

Israeli believes that boycott campaigns against its settlement products, attempts to prosecute Israeli leaders for war crimes, any criticism of Israel’s policies against the Palestinians and criticisms of the ongoing occupation, as forms of racism and antisemitism.