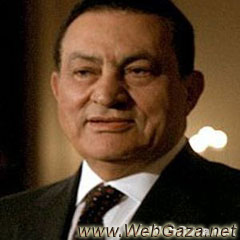 On Wednesday, Egypt’s President, Hosni Mubarak, held separate talks in Cairo with Palestinian President, Mahmoud Abbas, and U.S Middle East Envoy, George Mitchell, and discussed the means to resolve the current deadlock in peace talks.
Recently, the United States admitted it had failed in persuading Israel to freeze its settlement activities in the occupied territories.

The Palestinian Authority’s stance is that peace talks cannot be resumed while Israel continues its invasions and violations, and while it is ongoing with its settlement construction and expansion in the occupied territories, including in occupied East Jerusalem.

Following his meetings, Mitchell told reporters that extensive efforts are needed to bridge the differences between Israel and the Palestinians, and that the United States is still interested in helping the two parties reach a peace deal on final-status issues.

Mitchell arrived in Cairo on Monday after he held talks with Palestinian and Israeli officials.

He stated that peace is not an easy task, and that Israel and the Palestinian Authority of President Mahmoud Abbas, have asked the United States to continue its mediation efforts.

The main issues that continue to obstruct talks are Israeli settlement activities, borders, security, national resources and the Right of Return of the Palestinian refugees.

Foreign minters of Syria, Morocco, Algeria, Lebanon and Jordan did not attend the meeting.

Sheikh Jassem delivered an extended speech in which he called on the Arab countries to resolve the current situation, and stated that peace talks are currently taking a difficult angle that must be dealt with.

He said that peace talks based on a real and comprehensive peace, and the two-state solution, must be resumed.

Sheikh Jassem added that the Palestinian State must be established in all territories occupied by Israel following the 1967 war, and that East Jerusalem must be the capital of this state.

He demanded the United States to resume its role, and to act on lifting the illegal Israeli siege on Gaza, and also called on the Palestinians to achieve reconciliation.

The final statement of the conference supported the Palestinian stance of not holding talks while Israel is conducting its illegal settlement activities.

The statement also supported heading to the Security Council to demand an international recognition of an independent Palestinian state, and to demand the Council to oblige Israel to stop its settlement activities.

He added that the crisis started after the United States failed in convincing Israel to stop its settlements activities.