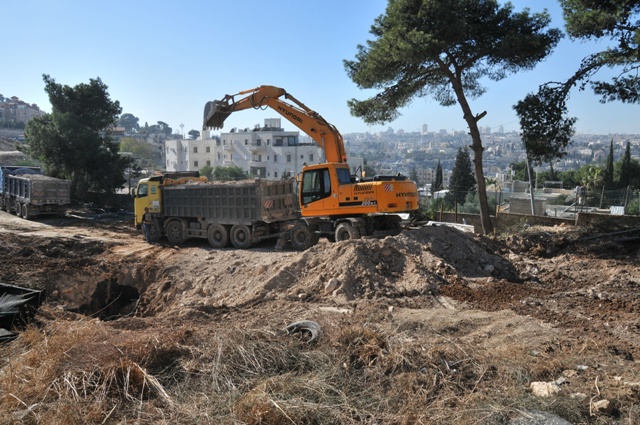 According to Israel Radio, the Jerusalem Municipality gave approval, on Thursday, the construction of 24 additional Jewish houses, near the Ultra-Orthodox center Beit Orot in the occupied East Jerusalem. Ma’an News reported.Bulldozers began the infrastructure work on Thursday morning, excavating the ridge of the Mount of Olives, near the Beit Orot Yeshiva (rabbinic school) in East Jerusalem. The project is expected to be completed in a year.

The religious center’s website quoted that the new construction consists in ‘8 homes in 3 new residential buildings, each 3 stories high, which are intended to provide housing for married students and to enhance the development of the educational complex.’

Shlomo Zwickler, Executive Director of Beit Orot, defined the project as ‘an anchor to connect all areas of Jerusalem together. One of the goals of Beit Orot is to reconnect people to the historic areas of Jerusalem, including the Mount of Olives Ridge and Mount Scopus. This new construction makes major headway toward this goal.’

Early this year, the Jerusalem Municipal Planning and Construction Committee authorized the extension of the Irving Moskowitz Yeshiva & Campus, which took the name from the Jewish-American millionaire Irving Moskowitz, funder of the school.

Israel captured and annexed East Jerusalem in the 1967 Six Days War, a move not recognized internationally. Since then, a ring of Jewish settlements around east Jerusalem has been built, which houses about 200,000 people, the Associated Press reported.

The illegality of the settlement construction in East Jerusalem and the West Bank has been ratified by international law and has been criticized by both the E.U. and the U.S. In addition, it has become one of the most sensitive issues with regard to the U.S. led, failed Israeli-Palestinian peace talks.

The Jerusalem Municipality’s decision comes shortly after Israel and the U.S. acknowledged the fact that bilateral talks on settlement freeze in the occupied territories had failed, even amidst new U.S. guarantees and incentives.