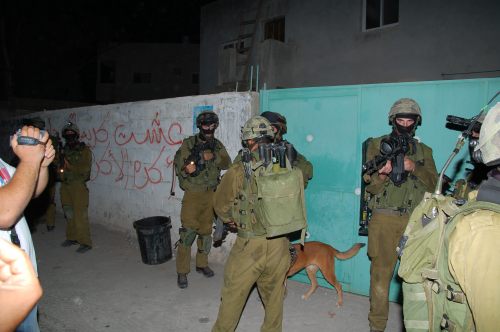 Israeli forces arrested, on Wednesday night, nine Palestinians from Hebron region and transported them to an unknown location, Ma’an News and PNN echoed. In a statement, the Israeli military said that the nine detainees are ‘terror suspects,’ and stressed that weaponry, including one shotgun, were discovered in one suspect’s home during the detentions, without specifying where.

According to Palestinian security sources, the detentions occurred in the town of Adh-Dhahiriya, where troops arrested Nidal al-Qayaseh, 21 years old, and Mustapha Al-Qayaseh, 19, as well as in the northern town of Dura, arresting brothers Shams and Nour al-Awawdeh, Muhammad Amro, Shadi al-Rujoub, Ammar Rab’i and Yousef al-Awawdeh, who according to PNN, works for the Bethlehem Magistrate Court.

The raids were denounced by Hebron governor Kamil Hamid, specifically with regard to Dura’s attack.

In addition, a local shepherd from Nablus Ibrahim Darwish reported being attacked on Wednesday by Israeli settlers.

Palestinian Authority official in charge of Settlement Affairs Ghassan Douglas said in a statement released to the press “Settlers came upon the shepherd Ibrahim Darwish while he was leading his flocks near the village of Qasreh and assaulted him.”

According to the statement, the settlers also killed a Darwish’s sheep and he was arrested for ‘brief period.’