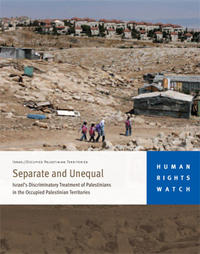 (Jerusalem) – Israeli policies in the West Bank harshly discriminate against Palestinian residents, depriving them of basic necessities while providing lavish amenities for Jewish settlements, Human Rights Watch said in a report released today.The report identifies discriminatory practices that have no legitimate security or other justification and calls on Israel, in addition to abiding by its international legal obligation to withdraw the settlements, to end these violations of Palestinians’ rights.

The 166-page report, ‘Separate and Unequal: Israel’s Discriminatory Treatment of Palestinians in the Occupied Palestinian Territories,’ shows that Israel operates a two-tier system for the two populations of the West Bank in the large areas where it exercises exclusive control. The report is based on case studies comparing Israel’s starkly different treatment of settlements and next-door Palestinian communities in these areas. It calls on the US and EU member states and on businesses with operations in settlement areas to avoid supporting Israeli settlement policies that are inherently discriminatory and that violate international law.

‘Palestinians face systematic discrimination merely because of their race, ethnicity, and national origin, depriving them of electricity, water, schools, and access to roads, while nearby Jewish settlers enjoy all of these state-provided benefits,’ said Carroll Bogert, deputy executive director for external relations at Human Rights Watch. ‘While Israeli settlements flourish, Palestinians under Israeli control live in a time warp – not just separate, not just unequal, but sometimes even pushed off their lands and out of their homes.’

By making their communities virtually uninhabitable, Israel’s discriminatory policies have frequently had the effect of forcing residents to leave their communities, Human Rights Watch said. According to a June 2009 survey of households in ‘Area C,’ the area covering 60 percent of the West Bank that is under exclusive Israeli control, and East Jerusalem, which Israel unilaterally annexed, some 31 percent of Palestinian residents had been displaced since 2000.

Human Rights Watch looked at both Area C and East Jerusalem and found that the two-tier system in effect in both areas provides generous financial benefits and infrastructure support to promote life in Jewish settlements, while deliberately withholding basic services, punishing growth, and imposing harsh conditions on Palestinian communities. Such different treatment on the basis of race, ethnicity, and national origin that is not narrowly tailored to legitimate goals violates the fundamental prohibition against discrimination under human rights law.

Israeli policies control many aspects of the day-to-day life of Palestinians who live in Area C and East Jerusalem. Among the discriminatory burdens imposed on Palestinians that Human Rights Watch found are Israeli practices of expropriating land from Palestinians for settlements and their supporting infrastructure; blocking Palestinians from using roads and reaching agricultural lands; denying access to electricity and water; denying building permits for houses, schools, clinics, and infrastructure; and demolishing homes and even entire communities. Such measures have limited the expansion of Palestinian villages and imposed severe hardships on residents, including leaving them with limited access to medical care.

By contrast, Israeli policies promote and encourage Jewish settlements to expand in Area C and East Jerusalem, often using land and other resources that are effectively unavailable to Palestinians. The Israeli government grants numerous incentives to settlers, including funding for housing, education, and infrastructure, such as special roads. Those benefits have led to the consistent and rapid expansion of settlements, the population of which grew from approximately 241,500 inhabitants in 1992 to roughly 490,000 in 2010, including East Jerusalem.

‘While Israeli policy makers are fighting for the ‘natural growth’ of their illegal settlements, they’re strangling historic Palestinian communities, forbidding families from expanding their homes, and making life unlivable,’ Bogert said. ‘The policies surrounding Israel’s settlements are an affront to equality and a major obstacle to ordinary Palestinian life.’

One of the Palestinian communities that Human Rights Watch examines in the report is Jubbet al-Dhib, a village with 160 residents southeast of Bethlehem that dates from 1929. The village is often accessible only by foot because its only connection to a paved road is a rough, 1.5 kilometer-long dirt track. Children from Jubbet al-Dhib must walk to schools in other villages several kilometers away because their own village has no school.

Jubbet al-Dhib lacks electricity despite numerous requests to be connected to the Israeli electric grid, which Israeli authorities have rejected. Israeli authorities also rejected an international donor-funded project that would have provided the village with solar-powered street lights. Any meat or milk in the village must be eaten the same day due to lack of refrigeration; residents often resort to eating preserved foods instead. Villagers depend for light on candles, kerosene lanterns, and, when they can afford to fill it with gasoline, a small generator.

Approximately 350 meters away is the Jewish community of Sde Bar, founded in 1997. It has a paved access road for its population of around 50 people and is connected to Jerusalem by a new, multi-million-dollar highway – the ‘Lieberman Road’ – which bypasses Palestinian cities, towns, and villages, like Jubbet al-Dhib. Sde Bar operates a high school, but Jubbet al-Dhib students may not attend. Settlements are designated closed military areas that may be entered only with special military permits. Residents of Sde Bar have the amenities common to any Israeli town, such as refrigerators and electric lights, which Jubbet al-Dhib villagers can see from their homes at night.

‘Palestinian children in areas under Israeli control are studying by candlelight while watching the electric lights in settlers’ windows,’ Bogert said. ‘Pretending that depriving Palestinian kids of access to schools or water or electricity has something to do with security is absurd.’

In most cases where Israel has acknowledged differential treatment of Palestinians – such as when it bars them from ‘settler-only’ roads – it has asserted that the measures are necessary to protect Jewish settlers and other Israelis who are subject to periodic attacks by Palestinian armed groups. But no security or other legitimate rationale can explain the vast scale of differential treatment of Palestinians, such as permit denials that effectively prohibit Palestinians from building or repairing homes, schools, roads, and water tanks, Human Rights Watch said.

Moreover, in addressing security concerns, Israel often acts as if all Palestinians pose a security threat by virtue of their race, ethnicity, and national origin, rather than narrowly tailoring restrictions to specific individuals who are shown to pose a threat. The legal prohibition of discrimination prohibits such broad-brush restrictions.

‘The world long ago discarded spurious arguments to justify treating one group of people differently from another merely because of their race, ethnicity, or national origin,’ Bogert said. ‘It’s time for Israel to end its policies of discrimination and stop treating Palestinians under its control markedly worse than Jews in the same area.’

Israel’s highest court has ruled that certain measures against Palestinian citizens of Israel were illegal because they were discriminatory. However, Human Rights Watch is not aware that the courts have adjudicated whether any Israeli practice in the West Bank discriminated against Palestinians, although petitioners have raised such claims in a number of cases.

Human Rights Watch said that the blatantly discriminatory practices make it an urgent matter for donor countries to avoid contributing to or being complicit in the violations of international law caused by the settlements. These countries should take meaningful steps encourage the Israeli government to abide by its obligations, Human Rights Watch said.

Human Rights Watch reiterated its recommendation that the United States, which provides US$2.75 billion in aid to Israel annually, should suspend financing to Israel in an amount equivalent to the costs of Israel’s spending in support of settlements, which a 2003 study estimated at $1.4 billion. Similarly, based on numerous reports that US tax-exempt organizations provide substantial contributions to support settlements, the report urges the US to verify that such tax-exemptions are consistent with US obligations to ensure respect for international law, including prohibitions against discrimination.

Human Rights Watch called on the EU, a primary export market for settlement products, to ensure that it does not provide incentives for settlement exports through preferential tariff treatment, and to identify cases where discrimination against Palestinians has contributed to the production of goods. For example, the report documents how crops exported from settlements using water from Israeli-drilled wells have dried up nearby Palestinian wells, limiting Palestinians’ ability to cultivate their own lands and even their access to drinking water.

The report also describes cases in which businesses have contributed to or benefited directly from discrimination against Palestinians, for example through commercial activities on lands that were unlawfully confiscated from Palestinians without compensation for the benefit of settlers. These businesses also benefit from Israeli governmental subsidies, tax abatements, and discriminatory access to infrastructure, permits, and export channels. Human Rights Watch called on businesses to investigate, prevent and mitigate such violations, including ending any operations that cannot be separated from discriminatory Israeli practices.

‘Discrimination of the kind practiced daily in the West Bank should be beyond the pale for anyone,’ Bogert said. ‘Foreign governments and businesses at risk of being tainted by Israel’s unlawful practices should identify and end policies and actions that support them.’