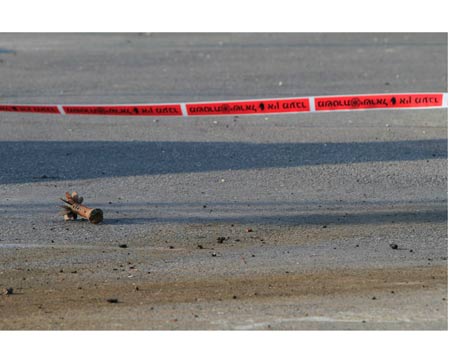 Israeli news agency Yedioth Ahranoth reported Monday that seven homemade shells were fired from the Gaza Strip into the Negev Desert on Sunday. No injuries or damage were reported.

The armed wing of the Popular Resistance Committees claimed responsibility for four mortar shells that were fired on Sunday toward the Gaza-Israel border areas of Eshkol Regional Council and Hof Ashkelon Regional Council, with no damages reported.

The Salah Ad-Din Brigades said in a statement that it “shelled a group of tanks with nine mortar shells near Karem Shalom, east of Rafah. Another group fired two mortars on the Abu Safeiyah post east of Al-Bureij,’ Ma’an Mews reported.

This news comes after an air strike carried out by the Israeli army on Saturday, which killed five Palestinians. The military declared that the strike targeted fighters preparing to launch homemade shells into an adjacent Israeli area.

The slain fighters were apparently members of the Al Quds Brigades of the Islamic Jihad and the Popular Resistance Committees.