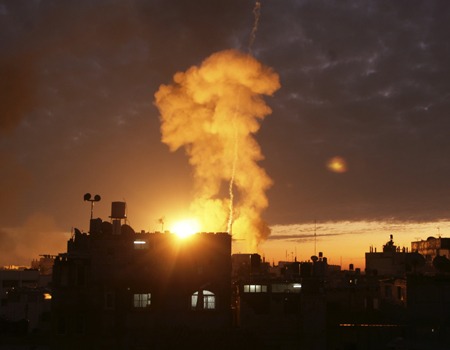 Late Monday night, Israeli warplanes dropped bombs in different parts of the Gaza Strip – initial reports from the ground indicate that at least eight separate bombs were dropped in several areas in the crowded, 15-mile wide Strip.A representative of the Qassam Brigades, the armed wing of the Hamas party, stated that two of the Brigades’ fighters were injured in one of the airstrikes in Khan Younis, in the southern Gaza Strip, one of whom was seriously wounded.

Palestinian resistance groups responding to Saturday’s assault fired seven homemade shells across the border with Israel on Sunday. These crude homemade shells consist of dynamite packed into metal piping, and cannot be aimed with any accuracy. The shells landed in the Negev desert, causing no injuries or damage.