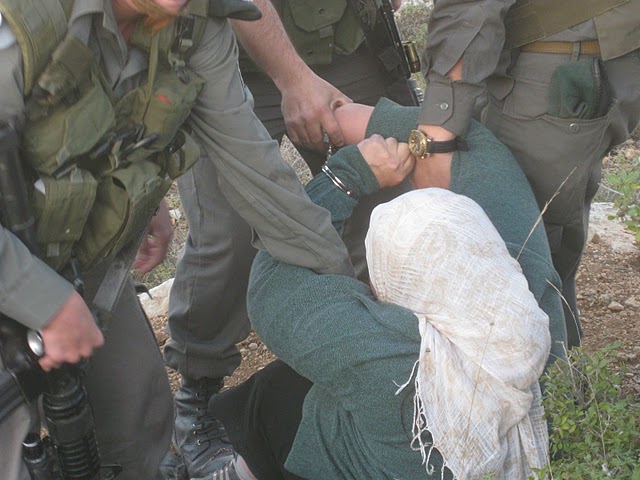 Dr. Mazin Qumsiyeh, a Palestinian nonviolent activist and seven other villagers form Al-Walajah village were kidnapped by the Israeli soldiers, Wednesday afternoon.IMEMC received a call from Mazin around 14:45 saying that Israeli bulldozers accompanied by military vehicles are bulldozing land in the western part of Al-Walajah, and that the residents of the village are peacefully protesting against that.

Dr. Qumsiyeh, is the chairman of the Palestinian Centre for Rapprochement between People, the mother organization of IMEMC, he is also a professor at Bethlehem University.

Below is an eyewitness account by Mazin’s wife, Jessie

This afternoon at around 2:30 Mazin said that we have to go to Al-Walaja immediately. He said he just got a call from the villagers that Israeli bulldozer was clearing an area in a different side of the village (the villagers were still trying to figure out the legal situation) than the familiar site where illegal Israel wall construction has been going on for the past year. We were at his office at Bethlehem University at the time.

We dropped everything we were doing and took off. When we arrived at the site, the bulldozer was idle with a dozen solders and private security personnel around. We found out from the 20 some villagers gathered there that they managed to asked the work to be stopped pending further instructions. Thirty minutes later, some military spokesperson came to talk to the villagers in Arabic (which I don’t understand.) He came along with more armed forces – there were about 50 to 60 by then, more than the number of the local villagers present.

If I understood correctly through Mazin’s brief translation, Israeli spokesperson was saying that their work was based on the 2006 order (but that order has expired and currently there is a supreme court case pending.) So as the bulldozer resumed, and the soldiers spreaded out getting villagers away from the work site and started arresting people who simply were hanging around there. While I was taking picture of a Palestinian male being taken away by Israeli soldiers, I suddenly noticed Mazin was surrounded by soldiers in a lower level terrace from where I was standing trying to speak to the solders (probably telling them they don’t have any valid work order and should not resume the bulldozing.) Right at that moment, they decided to take him away. That was around 3:20 p.m., less than an hour after we got there. I only remembered to take a picture of him being taken away from a distance. In rapid succession, Israeli soldiers snatched more Palestinian villagers – in all eight of them, including an older gentlemen, two teenagers, three other gentlemen, and Sheerin Al-Araj whom I knew as the vocal activist from the village.

Mazin was not reachable by phone after that for two hours. Then I reached him by phone and took down some notes from him during a short conversation. He said that they are detained outside Bethlehem Checkpoint 300 at the time.

An Israeli soldier named Almog Kahalani was very rough with them. He beat
the two young Palestinian men, causing one with stomach problem. The
soldiers were very rough with Sheerin that I can hear in the background
while talking with Mazin on the phone. Three of them had metal handcuffs, he and the rest were tied with plastic handcuffs that was very tight and causing circulation problem. A young man’s handcuff was so unbearably tight but Israeli soldiers refused to loosening it. The soldiers had just untied the plastic ones after about two hours (but kept the metal ones on the other three, Sheerin was one of them) and that’s why Mazin was able to use his hand to hold his phone and speak with me. They were asked to sign on a piece of paper (don’t know what’s the content but must be in Hebrew that nobody understand). But everyone of them refused to sign as advised by a Palestinian lawyer who was present there. While detained there, they tried to speak to the soldiers about international law, but the soldiers were saying ‘they don’t give a f— ‘ about international law and you people and they only care about obeying orders.

Another hour later, I got another update from Mazin that they have been transferred to Atarot (I don’t know where is this, but people familiar with this said it is near Ramallah.) They are waiting to appear in front of a judge. They are cold and hungry. The Israeli personnel there sprayed cold water on them and claiming it is an accident.