Palestinian Draft Resolution Will Be Presented to UNSC 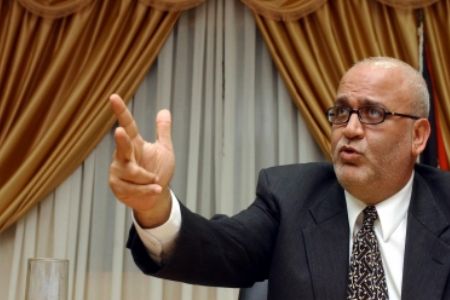 Palestinian chief negotiator Erakat announced on Wednesday that a draft resolution on settlements is ready to be put forth at the UNSC in February, media agencies said.

Saeb Erakat, the chief Palestinian negotiator in the peace talks, asserted that a draft resolution that condemns Israel’s settlement activity is set to be presented to the UN Security Council in February, after the US ends its presidency of the Council.

Erakat also warned that he would resort to the International Court of Justice should the resolution not receive a favorable vote by the Security Council. He expressed hope that the US would not use its veto power to stop it.
He stated: ‘We are not condemning Israel. We are condemning settlement activities and we hope the resolution will pass,’

Erakat added that fifteen countries helped to draft the proposal. The resolution will be presented by a full member of the council since the Palestinians have only observer status at the United Nations.

Acting Palestinian President Abbas had appealed to the UNSC, last November to reach a solution to freeze Israel’s ongoing construction of settlements in the West Bank despite an international call to stop the expansion of illegal settlements. Abbas’s spokesman asserted on that occasion: ‘Something must be done on the international level to halt the settlement expansion which the Israeli government is undertaking in the West Bank, and in Jerusalem.’

Meron Reuben, Israel’s ambassador to the UN, slammed the UN draft resolution calling it an ‘attempt to bypass negotiations,’ Haaretz quoted. The Israeli envoy reportedly stated that the only road to peace was through direct negotiations. Reuben said: ‘Israel has demonstrated time and time again its commitment to peace and we hope that the International Community won’t allow these moves to divert both sides from reaching the real goal – peace and stability in our region.’

A senior UN official, Haaretz reported on Wednesday, had anticipated that the Palestinians and representatives of Arab countries were working to promote the draft resolution, and had met with members of the Non-Aligned Movement.

Palestinians demand that Israel end settlement building on occupied territories of the West Bank, and also in areas in and around East Jerusalem that were seized by Israel in the 1967 Six-Day War, where Palestinians plan to establish an independent state.

The settlements are considered illegal under the international law due to their construction on annexed Palestinian land. Major powers including the US see Israel’s settlement activity as an obstacle to a peace agreement.

Direct peace talks between Palestinians and Israel were called off following the Israeli government’s refused to extend a 10-month partial settlement freeze in the West Bank.