‘Israeli War Crimes’ Ads to Appear in US 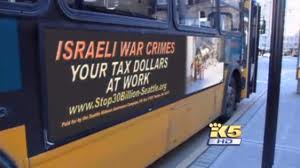 A group of peace activists based in Seattle, Washington has launched a series of ads on city buses reading ‘Israeli war crimes: Your tax dollars at work’. A poll by a local tv station showed overwhelming support for the ads among respondents.The Seattle Mideast Awareness Campaign paid for the large banner ads to appear on 12 local commuter buses, beginning Monday, the third anniversary of Israel’s invasion of the Gaza Strip.

The buses will carry the message ‘Israeli war crimes: your tax dollars at work,’ with pictures of Palestinian children standing around a demolished building. The advertisements will run for four weeks.

Ed Mast, a Seattle campaign activist, said the ads are meant to protest a pledge made by the US in 2007 to support Israel with 30 billion dollars in military aid in the next 10 years.

Mast stated: ‘The Seattle Mideast Awareness Campaign is launching the advertising campaign aimed at securing equal rights for Palestinians and Israelis, as well as an end to United States military aid to Israel, which continues at a time of economic crisis and severe budget cuts that have resulted in massive unemployment.’

The 2008-2009 Israeli offensive against Gaza killed more than 1,400 Palestinians, mostly women and children. Thousands of Palestinians were also injured during the 22 day-all out Israel’s attack, and an estimated 13,000 buildings were razed to debris.