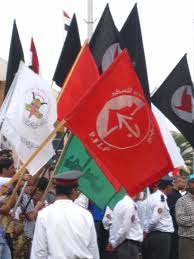 Ahmed Abdulkarim, head of the committee, was quoted as saying that four truckloads containing 80 tons of food, medicine, and clothes were sent to the coastal enclave via Jordan to help relieve the Gazans’ suffering, especially with the upcoming Christmas and New Year’s festivities.

Abdulkarim commented that the Syrian aid convoy highlights their constant support of the people of Gaza. He also noted that the Jordanian Hashemite Charity Organization would take over the shipment at the Syrian-Jordanian border and ensure delivery of the aid to Gaza.

In related news, it was reported that 15 Lebanese supporters participated in the Asia aid convoy including doctors, as well as heads and representatives of humanitarian and civil institutions.

Deeb Hijazi, rapporteur of the national initiative committee to break Gaza siege in Lebanon, publicly said the convoy will reach the Syrian port of Latakia in a few days, and is set to arrive in Gaza on 27 December, which marks the second anniversary of Israel’s war on Gaza. Nabil Hallaq, Director of the committee’s foreign relations, anticipated that a delegation from the convoy will arrive in Beirut next Thursday.

Meanwhile, Feroz Mesberola, chief of Gaza-bound Asian Convoy 1, was pleased with his crew after the convoy landed in Damascus, on Wednesday, where they met with Khaled Meshaal and other resistance movement leaders. Mesberola stated: “Our dreams came true when arriving at this place, we stood before Palestinian resistance leaders headed by Khaled Meshaal. We hope to reach Palestine. We know we are facing a group of leaders and fighters who sacrificed and lost many of their loved ones,” He also said: “Our main objectives are to free Palestine, end the siege on Gaza, strengthen the boycott of the racist regime in Israel, and to stand in the face of US-Israeli imperialism and unite Asians to stand in the face of imperialism.”

The Asia convoy left from New Delhi, India, and crossed Iran and Turkey. Some 120 Asian activists, along with others from Arab countries, joined the relief mission.