Lieberman: “P.A. An Illegal Entity, Not Interested In Peace” 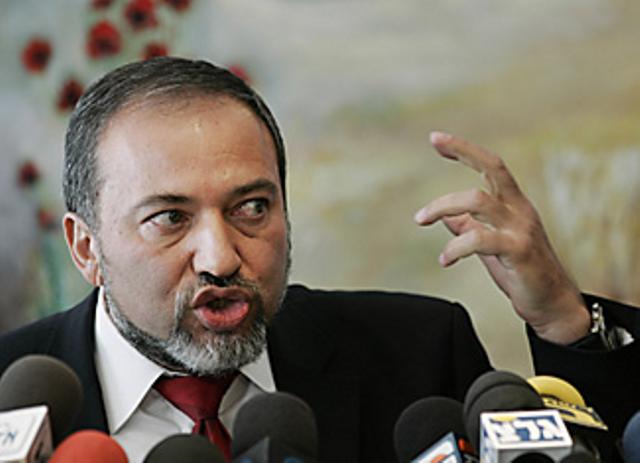 Israeli Foreign Minister, a leader of the fundamentalist Israel Beiteinu Party, claimed Sunday that the Palestinian Authority (P.A) is not interested in peace with Israel, and stated that the P.A is an illegal entity. His statements came during the annual conference with international ambassadors in Israel.

Lieberman stated that even of Israel proposes a full withdrawal from the occupied territories “the Palestinians will make an excuse not to sign a peace agreement with Israel”.

He stressed on what he called “a transitional long-term agreement” that only focuses on economy and security, without touching essential issues such as Jerusalem, borders and the Right of Return of the Palestinian refugees.

The Israeli FM added that “the Palestinians are deluding themselves when they think that they can achieve greater political gains far away from the negotiations table”, and described the Palestinian Authority as an “illegal entity that lost the elections and is refusing to hold new elections fearing that Hamas will win again”.

Referring to the Israeli-Turkish relations, Lieberman refused to apologize to Turkey for the Israeli attack on the Mavi Marmara Turkish solidarity ship and the death of nine Turkish activists.

The ship was part of the Freedom Flotilla that was heading to Gaza to deliver essential medical and humanitarian supplies, including wheelchairs and urgently needed medical equipment and medications.

He described the Turkish demand of an Israeli apology and compensation for the families of the victims as “rude”.

Lieberman added that “Turkish leaders lie to Israel and are making up false accusations”, and stated that “he will not tolerate this behavior”.

Commenting on the statements of Lieberman, Dr. Ghassan Al Khatib, head of the Media Office of the Palestinian government in the West Bank, stated that Lieberman is trying to deny the international isolation of Israel for its assaults against the Palestinians and their supporters.

Al Khatib added that the International Community knows that Israel is creating obstacles for peace in the region, and stated that progress in peace talks can only be done by ending the occupation.

The office of Israeli Prime Minister, Benjamin Netanyahu, issued a press release stating that the statements of Lieberman only represent his own opinion, and do not reflect the official stance of the government.