Palestinian Youth Assaulted Near Nablus For Not Understanding Hebrew 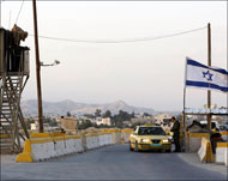 Israeli soldiers stationed at the Za’tara Roadblock, near the northern West Bank city of Nablus, stopped three Palestinian youths and violently assaulted one of them for not understanding them when they spoke to him in Hebrew. The youth, Bilal Hasan, 20, and two of his friends from Qaqra village, south of Nablus, were standing at the Za’tara Israeli military roadblock, waiting for a cab to take them to Salfit city where he is taking driving lessons.

Bir Zeit University Journalism student, Ahmad Judy, was standing at the roadblock and witnessed the attack.

He said that a military Jeep drove to the roadblock, and the soldiers started talking to the three youths in Hebrew.

When three could not understand what the soldiers were saying, as they cannot speak Hebrew, one of the soldiers wrapped the wire of his two-way communication radio around the neck Bilal Hasan and tried to strangle him with it, an issue that made him push the soldier away.

The soldiers them started beating and kicking Hasan before they cuffed him and took him to an unknown destination.