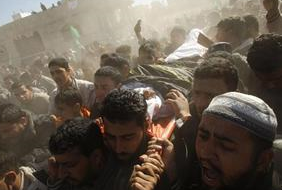 Palestinian medical sources reported on Tuesday evening that one resident was killed, and five others were injured, when the Israeli Army bombarded an area in Khuza’a town, east of Khan Younis, in the southern part of the Gaza Strip.Adham Abu Salmiyya, spokesperson of the Medical and Emergency Services in Gaza, reported that the army fired several shells into Khuza’a, and that a number of homes were hit.

Abu Salmiyya added that resident Hasan Abu Rock was killed after being hit by shell fragments in his face, legs and several parts of his body.

He stated that one of the five wounded residents is in a serious condition, while the rest suffocated due to fire and smoke resulting from the shelling; four were moved to the European Hospital, and the fifth was moved to Nasser Hospital.

On Sunday, two fighters of the Al Quds Brigades, the armed wing of the Islamic Jihad, were killed during an Israeli military invasion into Khan Younis.

The fighters were killed during armed clashes with the invading Israeli soldiers.

It is worth mentioning that a number of Palestinian factions in Gaza, excluding Fateh movement, held a meeting on Sunday to discuss the Israeli threats to attack Gaza.

Israel claims that the offensive was a “needed actions” due to ongoing firing of homemade shells into Israeli settlements and towns close to the border with Gaza.

Most of the casualties were civilians, including elderly, children, infants and members of the civil emergency services as the army bombarded residential areas, medical centers and hospitals, infrastructure, educational facilities including UNRWA schools where civilians took shelter, mosques and other civilian structures.