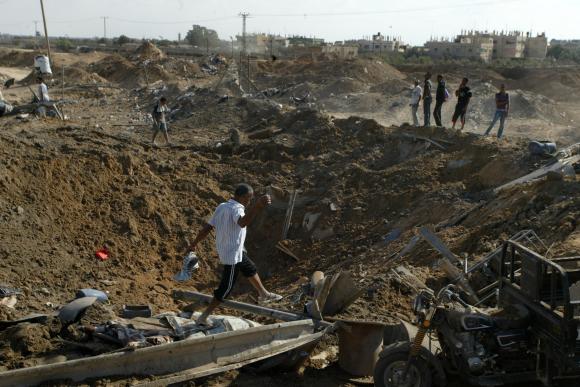 The Israeli Air Force attacked two areas in the Gaza Strip overnight under the pretext of responding to a Qassam homemade shell that was allegedly fired from Gaza into an open area in Ashkelon (Asqalan); no injuries were reported.Israeli military sources confirmed ‘the direct hits’ and said in a statement that the targeted sites were a training center for Hamas fighters, and a siege-busting tunnel near Rafah, in the southern part of the Gaza Strip.

The army stressed that the air-strike came in ‘response to this morning’s [Tuesday] firing of the Qassam homemade shell.’

But armed groups in the Gaza Strip did not issue any statement in this regard.

Israeli military and political officials accused the Hamas movement and its dissolved government in Gaza, of being responsible for the attacks ‘as it is responsible for maintaining the calm in Gaza’.

The officials added that ‘Israel will respond harshly to any terror attempt’.

According to the statement, Hamas is intensifying its efforts to prepare for a direct military encounter with the Israeli army ‘in order to infuse the situation’.

Israel claims that Hamas and other armed groups in Gaza have stepped-up the firing of homemade shells into adjacent Israeli settlements and towns.