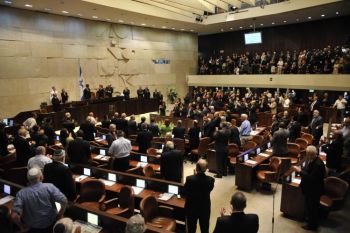 The Knesset will vote on Wednesday on a proposal initiated by Yisrael Beiteinu to establish a committee of inquiry into groups that are critical of human rights violations committed by the Israeli military.According to Haaretz, the proposal has the backing of a majority in the Knesset, including Likud, Shas, Habayit Hayehudi, National Union and United Torah Judaism.

‘For a decade now, a coalition of international groups has been active, in cooperation with Israeli organizations, while taking advantage of discourse on human rights, with the goal of damaging the legitimacy of the activities of IDF soldiers, encouraging draft-dodging and branding IDF soldiers and commanders as war criminals,’ Yisrael Beiteinu’s initiative states. The proposal also says the committee should ‘check what the sources of funding are for this anti-Israeli activity.’

MK Nitzan Horowitz from Merez is critical of such a proposal. According to Horowtiz, the purpose of forming such a committee is to silence criticism, calling it, ‘a brutal act of political persecution using a coalition majority and Knesset funding, under the legal guise of an investigation committee.’

‘Investigate us all, we have nothing to hide. You are invited to read our reports and our publications. We will be happy if for a change you relate in a germane way to our questions instead of trying to besmirch us. It did not work in the past and it will not work this time,’ the letter said.

The executive director of The Association for Civil Rights in Israel, Hagai Elad, said yesterday: ‘What exactly do the Yisrael Beiteinu lawmakers think – that whenever they don’t like criticism of government policy, they’ll establish an investigative committee or try to advance legislation to shut people up?’