Army Demolishes A Home Near Qalqilia 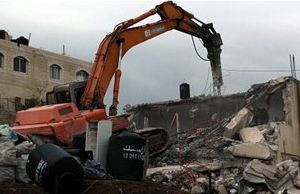 The Israeli Authorities demolished, on Tuesday morning, a home in Azzoun Atma village, near the northern West Bank city of Qalqilia, under the pretext of being constructed without a construction permit. The demolished building belongs resident Mo’een Younis; his 130-square-meter building was constructed eight years ago.

Six months ago, Israel demolished a structure used by Younis as a chicken farm, his only source of income.

After demolishing his home on Tuesday, Younis said “Today, the occupation came to fulfill its plan, to demolish my home, my long awaited dream of a home”.

The village is isolated by the Israeli Annexation Wall that was deemed illegal by the International Court in the Hague.

The village, and a number of nearby villages, lost more than 40.000 Dunams of land for illegal Israeli settlements.

The Annexation Wall isolated 700 Dunams of land that belong to residents of Azzoun Atma as well as from the villages of Beit Amin and Sanniriyya.