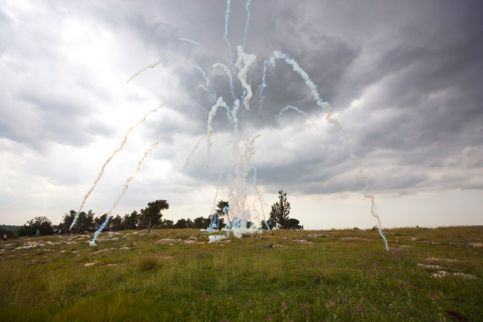 Four activist groups in the US are calling on a tear gas manufacturer to stop providing its products to the Israeli military following the death of Jawaher Abu Rahmah from severe respiratory distress on 1 January 2011 after inhaling tear gas fired by the Israeli army in the occupied West Bank village of Bilin.Adalah-NY: The New York Campaign for the Boycott of Israel, Code Pink, Jewish Voice for Peace and the US Campaign to End the Israeli Occupation issued a letter to US-based Combined Systems, Inc (CSI) on 3 January urging the company to ‘cease providing CSI equipment to the Israeli government in response to the Israeli military’s ongoing and foreseeable misuse of CSI crowd control equipment to kill and maim protesters in the Occupied Palestinian Territories’ (‘Combined Systems, Inc, Stop providing equipment …,’ 3 January 2011).

‘Over the last two years alone, the Israeli military has used your products to kill two peaceful protesters from one family in the West Bank village of Bilin, to severely injure two peaceful protesters from the US and to seriously injure many more,’ the letter stated. ‘According to the the Israeli human rights group B’Tselem, two other Palestinians were killed by Israeli tear gas in 2002.’

The letter added that the tear gas canisters sent by CSI to the Israeli military could have been provided as part of the US government’s military aid package to Israel — funded by US taxpayer money.

The groups pointed out that the US State Department provided nearly $2 million worth of ‘tear gasses and riot control agents’ in its 2007 and 2008 aid packages. ‘As taxpayers, we strongly object to the possibility that CSI may be using our tax dollars to support Israel’s repression of Palestinian rights,’ the groups stated.

The Electronic Intifada published an action alert drafted by Adalah-NY’s Coalition for Justice in the Middle East which urges individuals to email executives at CSI and the companies that invest in CSI, ‘and tell them to stop providing their tear gas to the Israeli military before more protesters are killed and maimed.’

Meanwhile, more than 150 university and college faculty from a variety of academic fields in Israel have signed a letter stating their ‘unwillingness to take part in any type of academic activity taking place in the college operating in the settlement of Ariel’ (‘Israel Prize laureates join academic boycott of settlement university,’ Haaretz 9 January 2011).’

The academics’ letter points out that Ariel settlement — like all Israeli settlement colonies in the West Bank, including East Jerusalem — contravene international laws including the Geneva conventions.

‘Ariel was built on occupied land,’ the letter states. ‘Only a few kilometers away from flourishing Ariel, Palestinians live in villages and refugee camps under unbearably harsh conditions and without basic human rights. Not only do they not have access to higher education, some do not even have running water. These are two different realities that create a policy of apartheid.’

Omar Barghouti, founding member of the Palestinian Campaign for the Academic and Cultural Boycott of Israel (PACBI), stated by email that despite its ‘selective nature’ in targeting academic institutions in Ariel and other settlements, ‘this Israeli campaign further proves that academic boycott is not only justified, but also quite effective as a nonviolent form of struggle to end violations of human rights and international law committed by academic institutions.’

Barghouti added that ”academic freedom’ can never be used as an excuse to cover up grave infringements of international law … now these Israeli academics seem to agree.’

The academic and cultural boycott movement began as a Palestinian-led initiative in 2004, joining the growing international boycott, divestment and sanctions movement against Israeli policies of apartheid in Palestine.

On 4 January, activists with the Minnesota Break the Bonds Campaign (MNBBC) urged its supporters to send a flurry of emails to state legislators demanding that the state divest from Israeli government bonds.

In a statement on its website, MNBBC said it ‘stands strong in our conviction that we, as people of Minnesota, want to cease our financial support of Israel’s atrocities’ (‘Act now! Send an email to your state legislators …,’ 4 January 2011).’

‘Together, we can be part of making 2011 a year that moves us ever forward in bringing down apartheid, colonial oppression, occupation and ushering in a just peace,’ the statement added.

In its mission statement, the MNBBC says that ‘Minnesota’s investment in Israel supports an apartheid system in both Israel and the Occupied Territories that causes thousands of civilian deaths, many of whom are children, and which involves the widespread abuse of human rights … We demand that the state of Minnesota act on its good conscience and support the breaking of economic ties with the apartheid state of Israel.’

Toronto-based activism group Teachers for Palestine (TFP) launched a website and officially called for the Ontario Teachers’ Pension Plan to divest from companies that ‘contribute to the system of Israeli apartheid.’

TFP is a group of elementary and secondary school teachers who say they ‘aim to raise awareness amongst pension plan members and education workers in general about Israel’s illegal occupation of the West Bank and Gaza, as well as its racist treatment of Palestinians inside of Israel’s 1948 borders’ (see the group’s website).

Amongst the five companies TFP has targeted for divestment from the pension plan are Cement Roadstone Holdings (CRH), an Irish building company with a 25 percent share in the Israeli corporation Mashav Initiating and Development Inc., the holding company of cement producer Nesher Cement. CRH has admitted that Nesher cement has probably been used to build Israel’s illegal wall in the West Bank.

Electronics corporation Siemens AG has also been identified by TFP as a target for divestment because of its development ties with Israel’s state water company Mekorot. Mekorot is known for its discriminatory water policies, as it has regularly cut off water access to Palestinian communities in the Jordan Valley while supplying illegal settlement colonies with water from aquifers in the West Bank.

‘Teachers can play a primary role in demanding divestment of their pension plan from companies that support apartheid practices in Israel,’ TFP stated (‘Teachers’ pension plan and apartheid: Time to divest again’).

The no-show of Israeli tennis player Shahar Peer at the Women’s International Tennis ASB Classic tournament last week was claimed as a ‘significant victory’ for the expanding boycott campaign in New Zealand.

According to a press release by Global Peace and Justice Auckland (GPJA), Peer was the subject of protest by boycott activists in 2009 and 2010, but had told the media she would return to play in Auckland in 2011 (‘Peer’s non-appearance a win for BDS campaign,’ 7 January 2011).

‘We expected her to enter the tournament at the last minute to avoid early publicity and controversy,’ GPJA stated. ‘However it seems she was unwilling to face further protests in New Zealand which could have led to greater pressure for her expulsion from other tournaments.’

GPJA added that Peer was banned from a match in Dubai, United Arab Emirates, following protests in 2009.

‘Peer is the highest-profile Israeli sportsperson and we take her non-appearance as a good sign for the strengthening of the BDS campaign,’ the press release added. ‘She wants to keep her career one step ahead of the boycott but it’s a race she will lose. The international campaign is tightening on Israeli representatives and companies which do business with apartheid Israel.’

Although exempted from regular, mandatory military service because of her tennis career, GPJA reported that Peer had said that her first day as an Israeli military inductee was ‘better than playing [tennis legend] Maria Sharapova.’

Organizers and activists with GPJA are holding a seminar this week with Michael Deas, the Europe Coordinator of the Palestinian BDS National Committee (BNC). The group says it will be ‘looking at what further action New Zealanders can take to isolate Israel and support the Palestinian struggle.’

Forty Palestinian and international solidarity groups and boycott organizations signed onto a statement urging American rock icon Jon Bon Jovi to cancel a planned performance in Israel ‘until the time comes when Israel is in compliance with its obligations under international law and fully respects Palestinian rights’ (‘Open letter to Jon Bon Jovi: This one should go out to the Palestinians!,’ 6 January 2011).’

‘World-renowned artists, among them Bono, Snoop Dogg, Jean Luc Godard, Elvis Costello, Gil Scott Heron, Carlos Santana, Devendra Banhart, Faithless and the Pixies have also canceled their performances in Israel over its human rights record,’ the statement added. ‘All we are asking is for you to act consistently in the spirit of your past social actions, and to refrain from crossing a picket line called by Palestinian society, endorsed by international organizations and increasingly supported by progressive Israelis.’

During an appearance on CNN talk show Larry King Live last month, Bon Jovi announced that he was going to play in Israel. However, a specific date for that concert has not been published on the Bon Jovi website at the time of publication.

Additionally, a group of Israeli activists with Boycott! Supporting the Palestinian BDS Call from Within (BFW) called on American singer Macy Gray to cancel her upcoming concert in Israel. ‘We know that you performed in Israel before, but some artists who come here are not fully aware of their performance’s implications when they choose to do so,’ the activists stated (‘Macy Gray, performing in Israel is already political,’ 6 January 2011).

‘Coming to perform in Israel has become a political act, a statement of support for the state of Israel’s ongoing crimes and human rights violations,’ the statement added. ‘It is also an act against a rapidly growing nonviolent, human-rights based civil society Palestinian movement. The question remains: is this a political act you wish to take part in?’

And finally, BFW called on French pop star Vanessa Paradis to cancel her March 2011 concert in Tel Aviv. Paradis will be joined by her partner, American film icon Johnny Depp, and the two have expressed their intention to meet Israeli President Shimon Peres during their visit.

‘There is no way your presence here can escape being interpreted as a political act,’ activists with BFW stated (‘Vanessa Paradis and Johnny Depp, please do not allow the state of Israel to use your reputation to whitewash its crimes,’ 30 December 2010).

‘It will therefore not be about the sheer joy of your music and films,’ the statement added. ‘Instead, it will have the effect of contributing to Israel’s image of normality, to its government as well as to the rest of the world. We, therefore, ask you to reconsider.’