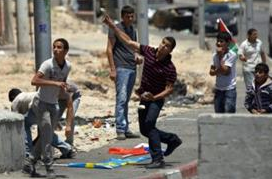 Palestinian medical sources reported Thursday that six Palestinians were wounded, one seriously, after a group of armed Israeli settlers invaded Qasra village, near the northern West Bank city of Nablus. The attack was carried out on Thursday afternoon after Israeli soldiers dismantled an illegal settlement outpost that was installed on privately-own Palestinian lands.

The settlers hurled stones at the residents and their homes, and fired rounds of live ammunition. They also torched a car that belongs to resident, Ayman Taiseer.

The sources added that Israeli soldiers were at the scene but did not attempt to prevent the attack.

Qasra village is located close to several settlements and illegal settlement outpost, and was repeatedly attacked by the settlers.