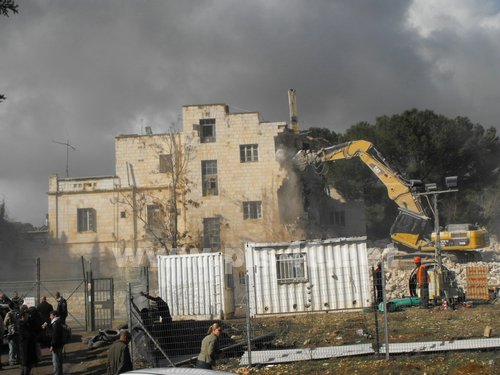 In addition, Israeli warplanes attacked a number of targets in the Gaza Strip, and Israeli forces continued to use force against peaceful protests in the West Bank.

Israeli forces conducted 40 incursions into Palestinian communities in the West Bank this week, during which they abducted 15 Palestinian civilians, including a member of the Palestinian Legislative Council and 3 children. On 07 January 2011, Israeli forces killed an elderly man who was asleep in his bed in Hebron. The soldiers stormed the second floor of the building, where ‘Omar Saleem Suleiman al-Qawasmi, 66, lives with his wife and their disabled son. Al-Qawasmi is a relative and a neighbor of an activist of Hamas. Israeli soldier broke into the house pointing their guns in the face of the wife who was awake. They then fired at al-Qawasmi who was sleeping from a range of two meters. He was instantly killed. Parts of his brain fell onto the bed. They then took the wife and her disabled son Yousef, 45, out of the room.

When they verified that the victim was not the wanted person, Wa’el Sa’id al-Beitar, they left the house taking the victim’s body with them. They raided the first floor of the building and arrested al-Beitar. Later, Israeli forces delivered al-Qawasmi’s body to an ambulance of Palestinian Red Crescent Society. According to medical sources, the victim was hit by many bullets, mostly in the head and the chest, and parts of his face and head were crushed. Israeli forces admitted responsibility for the attack, but claimed that Israeli soldiers fired at the victim by mistake. An Israeli military spokesman claimed that the soldiers ‘fired at him thinking that he was armed and might pose a threat to their lives.’ Israeli soldiers claimed that they thought the victim was a wanted person.

In his testimony to PCHR, ‘Adnan Mohammed Ghunaimi, 43, an ambulance driver, stated: ‘At approximately 11:20 on Saturday, 08 January 2011, while I was on duty in Palestine Red Crescent Society, we received several phone calls from people, institution and security services that there was a wounded individual at al-Hamra checkpoint. Immediately, I, accompanied by two paramedics, drove the ambulance towards the checkpoint. We arrived there at approximately 11:45. We stopped about 300 meters away from the checkpoint. Israeli soldiers asked us what we were doing there and we told them that we learnt that there was a wounded Palestinian at the checkpoint. They asserted that, but prevented us from attending him, claiming that he might be carrying a weapon. They ordered us to move back up to 700 meters away from the checkpoint. At approximately 13:30, Israeli soldiers called on us through megaphones ordering us to prepare. We waited until 13:55, when they allowed us to move forward. We reached the victim. His face was to the ground and he was completely naked. He was covered with blood. He was hit by a bullet to the chest and another one to the abdomen. His wound was apparently not lethal, but he bled too much, so he died.’

On 10 January 2011, a Palestinian civilian was wounded when Israeli forces that had moved into Beit Liqya village, west of Ramallah, fired at a number of children and young men who threw stones at Israeli military vehicles.

On 09 January 2011, Israeli forces, accompanied by bulldozers, moved into Sheikh Jarrah neighborhood in East Jerusalem. They besieged the headquarters of Hajj Amin al-Husseini, mufti of Jerusalem and Arab nationalist leader during British rule of Palestine, which is known as ‘Shepherd Hotel.’ They demolished the northern part of the building, which was added to the structure in the 1960s, before the heirs of Hajj Amin al-Husseini were able to obtain a court ruling suspending the demolition of the structure, which was built in the 1930s, indefinitely. Israeli forces claim that the land on which the structure stands belongs to Irving Moskowitz, a Jewish US millionaire, and that he took all necessary steps to demolish the building.

On 12 January 2011, Israeli forces removed a commercial kiosk of kitchen tools belonging to Wa’el al-Razem in Sultan Suleiman Street in Jerusalem. Israeli forces also confiscated goods. According to al-Razem, he established the kiosk more than 11 years ago, and he had not received any warning to remove it. He estimated his loss at approximately 150,000 NIS.

On Wednesday, 12 January 2011, during a wide scale military operation, Israeli forces demolished several Palestinian civilian facilities in the southeast of Yatta town, south of Hebron. They demolished 11 houses, in which 27 individuals, including 17 children, live, 3 classrooms, 3 barnyards and 3 tents claiming that they are close to the annexation wall. According to investigations conducted by PCHR, at approximately 07:40, Israeli forces, accompanied by bulldozers, moved into the area after declaring it a closed military zone. They surrounded the elementary school in the area and forced teachers and students out. They then demolished 3 classrooms. Israeli forces then moved towards the residential community in the area. They forced residents of a number of houses out and demolished them together with a number of barnyards.

In the Gaza Strip, on 10 January 2011, Israeli forces shot dead a Palestinian farmer who was working on his land in the northern Gaza Strip town of Beit Hanoun. At approximately 14:05, Israeli soldiers positioned at the border between the Gaza Strip and Israel to the north of the northern Gaza Strip town of Beit Hanoun opened fire at a number of Palestinian farmers in al-Mazbala area in the north of the town. As a result, Sha’ban Mohammed Qarmout, 64, was wounded by several bullets to the heart, when he was farming his land, nearly 550 meters away from the border. He was evacuated to Beit Hanoun hospital, where he was pronounced clinically dead. At approximately 14:45, he was pronounced physically dead.

On 11 January 2011, Israeli forces extra-judicially executed an activist of the al-Quds Brigades (the armed wing of Islamic Jihad) in the southern Gaza Strip. An Israeli drone fired the victim while he was riding a motorcycle. They claimed that he was ‘preparing for a terrorist attack.’ A civilian bystander was also wounded.

During the reporting period, Israeli warplanes attacked a number of targets in the Gaza Strip. They bombarded a number of training sites of Palestinian resistance groups.

Israel has continued to impose a total siege and has isolated the Gaza Strip from the outside world. The illegal Israeli-imposed closure of the Gaza Strip, which has steadily tightened since June 2007, has had a disastrous impact on the humanitarian and economic situation in the Gaza Strip.

The illegal closure has caused not only a humanitarian crisis but a crisis of human rights and human dignity for the population of the Gaza Strip. Measures declared recently to ease the blockade are vague, purely cosmetic and fail to deal with the root causes of the crisis, which can only be addressed by an immediate and complete lifting of the closure, including lifting the travel ban into and out of the Gaza Strip and the ban on exports. PCHR is concerned that the new Israeli policy is simply shifting Gaza to another form of illegal blockade, one that may become internationally accepted and institutionalized. Palestinians in Gaza may no longer suffer from the same shortage of goods, but they will remain economically dependent and unable to care for themselves, and socially, culturally and academically isolated from the rest of the world.

Israel has continued its settlement activities in the West Bank in violation of international humanitarian law, and Israeli settlers have continued to attack Palestinian civilians and property.

On Saturday, 08 January 2011, Israeli settlers from ‘Gilad’ settlement, east of Qalqilya, attacked agricultural property belonging to ‘Aadel Hassan Yamin, 54, from Jeet village northeast of Qalqilya. As a result, the cover of a water hole was damaged.

On 10 January 2011, Israeli forces moved into Khillat al-Jammal area in the southeast of Beit Liqya village, west of Ramallah. They handed noticed to Palestinian civilians ordering stopping the construction of a house and 3 barracks claiming that they were being built without licenses.

On 10 January 2011, Israeli forces, accompanied by bulldozers, moved into ‘Azzoun ‘Atma village, southeast of Qalqilya. They demolished two houses. These house are located nearly 500 meters away from ‘Oranit’ settlement and nearly 120 meters away from the annexation wall.

On 12 January 2011, during a wide scale military operation, Israeli forces demolished several Palestinian civilian facilities in the southeast of Yatta town, south of Hebron. They demolished 11 houses, in which 27 individuals, including 17 children, live, 3 classrooms, 3 barnyards and 3 tents claiming that they are close to the annexation wall. Israeli forces also arrested 3 Palestinian civilians.

Following the Friday Prayer on 07 January 2011, dozens of Palestinian civilians and international and Israeli human rights defenders organized a peaceful demonstration in Bil’ein village, west of Ramallah, in protest to the construction of the annexation wall. The demonstrators included a number of PLC Members; Israeli Knessent Member Mohammed Baraka; Ms. Louisa Morgantini, former Deputy Speaker of the European Parliament; and a number of observers from the UN Office of the High Commissioner for Human Rights, the EU and the US consulate. The demonstrators raised the Palestinian flag and portraits of Bassem and Jawaher Abu Rahma, who were killed by Israeli forces in the village. They moved towards the annexation wall. Israeli soldiers stationed in the area fired rubber-coated metal bullets, sound bombs and tear gas canisters at the demonstrators. As a result, 3 Palestinian civilians, including a child, were wounded.

Additionally, a number of demonstrators suffered from tear gas inhalation and others sustained bruises as they were beaten by Israeli soldiers.

Also following the Friday Prayer on 07 January 2011, dozens of Palestinian civilians and international and human rights defenders organized a peaceful demonstration in Ne’lin village, west of Ramallah, in protest against the construction of the annexation wall. They clashed with Israeli troops positioned near the Wall. Israeli troops fired rubber-coated metal bullets, sound bombs and tear gas canisters at demonstrators. As a result, dozens of demonstrators suffered from tear gas inhalation, and others sustained bruises.

Also following the Friday Prayer on 07 January 2011, dozens of Palestinian civilians and international and Israeli human rights defenders organized a peaceful demonstration in Nabi Saleh village, northwest of Ramallah, in commemoration of the late Palestinian President Yasser Arafat, and in protest against land confiscations in the Wad al-Raya area between the villages of Nabi Saleh and Deir Nizam. When the demonstrators attempted to reach areas of land seized by Israeli settlers near ‘Halmish’ settlement, Israeli troops fired rubber-coated metal bullets, sound bombs and tear gas canisters at them. As a result, Eyas Mohammed Sarhan, 23, was hit by a tear gas canister to the right foot. A number of demonstrators also suffered from tear gas inhalation. Israeli forces also arrested ‘Odai ‘Abdul Hafiz Tamimi, 21.

The PCHR also called upon the European Union to activate Article 2 of the Euro-Israel Association Agreement, which provides that Israel must respect human rights as a precondition for economic cooperation between the EU states and Israel. PCHR further calls upon the EU states to prohibit import of goods produced in illegal Israeli settlements in the West Bank.