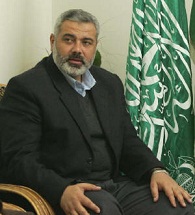 Prime Minister of the dissolved Hamas-led government in Gaza, Ismail Haniyya, instructed the Interior Ministry and the heads of the security forces to ensure claim with Israel, and to prevent any actions that could lead to renewed violence.Taher Al Nunu, spokesperson of the government in Gaza, reported that Haniyya issued “clear and direct orders” to the security forces to ensure calm in the coastal region and to coordinate their efforts with all factions in Gaza to ensure calm with Israel is maintained.

The statements of Al Nunu came after Haniyya held a meeting with his government, the leaders of the security forces, police heads and a number of ministers of his Gaza-based government.

Also, Haniyya informed the ministers on the contents of a letter send by the Egyptian leadership stating that Israel might be planning a new offensive against the Gaza Strip.

He said that it is essential to maintain dialogue with Egypt and with all Palestinian factions, adding that Hamas and other factions in Gaza are not interested in any military escalation.

Haniyya demanded the International Community to act against the Israeli violations and attacks against the Palestinian people, and to act on ending the illegal Israeli siege on Gaza.