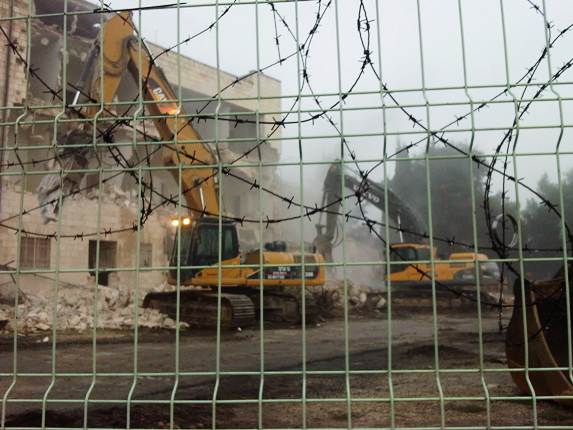 Even amidst international condemnation, the takeover of the Shepherd Hotel in East Jerusalem by Jewish settlers continued yesterday. Settlers are now planning to build 50 more housing units, in addition to the 20 units already authorized, in the Arab neighborhood of Sheikh Jarrah.Right-wing activists also said they plan to turn the main part of the historic building – originally constructed by the mufti of Jerusalem, Haj Amin al-Husseini – into a synagogue commemorating the victims of the Holocaust. Activists see this move as all the more poignant as Husseini was known for his collaboration with the Nazis.

Twenty of the housing units will be built on the garden south of the building. The wing added during the Jordanian rule of Jerusalem is to be demolished

‘As we were forced to preserve the building, we will turn it into the neighborhood synagogue and dedicate it to the memory of the Holocaust victims,’ said Jerusalem councilman Elisha Peleg (Likud ). ‘The synagogue will be doubly symbolic: It will replace the house of the mufti and it will mark the point where 78 physicians, nurses and patients were murdered on their way to Mount Scopus in 1948.’

All in all, the project intends to include 70 units meant for Jews. The plan will likely be delayed for an extended period of time, due to the sensitivity of the matter. Although Peleg believes the proposal will eventually pass.

‘There isn’t a chance in the world it won’t pass, because it follows the existing plans for the area,’ he said. ‘Jewish construction in the eastern part of Jerusalem will continue, because time is working for the Palestinians, who are illegally building thousands of housing units without permission.’

‘There’s nothing provocative about this site, it’s not in the heart of any Arab neighborhood,’ Peleg added.

Members of the Husseini family, who claim they own the building, appealed to the Supreme Court, demanding the construction work be stopped.

Their claims were rejected on Tuesday by a Jerusalem District Court judge, who also removed the injunction that prevented the start of the construction work.

Sheikh Jarrah is home to 3,000 Palestinians. Four families in the neighborhood have already been displaced by settlers. Settlers literally invaded the families’ homes and took them over, without any legal repercussions. Many of the remaining families face a similar fate, as they have received eviction orders.