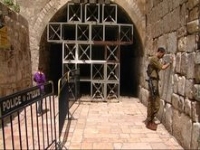 In a move that Muslim leaders in Jerusalem are calling a ‘provocation’, Israeli government officials on Saturday decided to expand the ‘Western Wall’ prayer site into the area known as Rabat al-Kurd, an alley used by 17 Palestinian families to enter their homes — despite a recommendation against the expansion by the Israeli Ministry of Tourism.Danny Zeidman, the head of the Israeli organization Ir Amin, told reporters with the Israeli newspaper Ha’aretz, ‘Allowing Jewish extremists to enter into the heart of the Muslim quarter carries the danger of turning a resolvable political conflict into a violent religious one.’

The area in question is a particularly contentious one, as it is claimed as a holy site by both Muslims and Jews. It lies just next to the Al-Aqsa Mosque, the site of the provocative visit by then-Prime Minister Ariel Sharon in September 2000 that sparked the second Palestinian uprising.

With the expansion of the so-called ‘Little Kotel’ area known historically as Rabat al-Kurd, the Islamic Waqf (Holy Foundation) of Jerusalem warns of a ‘strong response’ if the area is opened to Jewish worshippers.

Three months ago, the Israeli Ministry of Tourism issued a ruling advising against any change to the status quo — meaning that the area remain open to the Palestinian families who depend on the passage to get to their homes. By taking over the Rabat al-Kurd passage, human rights and Muslim groups warn, the Israeli government is setting itself up for potential confrontations and violence between Muslim and Jewish worshippers.