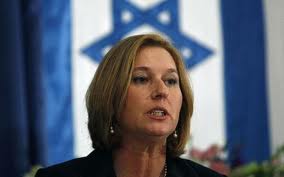 The two South African groups want to secure arrest for Livni over her involvement in the war crimes committed during the Gaza war two years ago, Haaretz quoting Channel 10 said.

Channel 10 cited South African media reporting on South Africa’s move. Iqbal Jassat, head of the MRN, was quoted saying: ‘We have now been informed that Livni has been invited to this country and have therefore instructed our legal team to take all necessary measures to secure an arrest warrant…our decision is based on the fact that South Africa is a signatory to the Rome statutes which obligates all member states to honour their responsibility in the prosecution of war criminals.’

The MRN’s chairperson revealed to Al Jazeera that the application for the arrest warrant, filed on Friday, followed an earlier lawsuit filed with South African prosecutors in August 2009. The complainants reportedly compiled a 3,000-page report documenting a wide varied evidence that charged Livni of being one of the architects of Operation Cast Lead.

Jassat added: ‘We are deeply disappointed with Livni’s hosts – the South African Jewish Board of Deputies and the South African Zionist Federation – for displaying gross insensitivity and arrogance by inviting a known violator of human rights to the country’

Livni was invited to South Africa by the local Jewish community to give a number of speeches and to hold meetings in Cape Town and Johannesburg.

Zev Krengel, South African Jewish board chairman, reacted with disappointment to the decision by the South African groups. He stated: ‘It is a pure intimidation tactic by people who are not interested in finding a solution to the situation in the Middle East,’

Krengel confirmed that Livni’s trip would go ahead next week as scheduled.

South Africa is the birthplace of international prosecutor Richard Goldstone, who was at the lead of the fact-finding commission mandated by the UN Human Rights Council to investigate the war on the Gaza Strip.

The Goldstone report predominantly showed the large extent of atrocities the Israel army committed against civilians in the coastal strip.

In December 2009, an arrest warrant was issued against Livni in the UK for war crimes she was responsible for, during the Israeli offensive on Gaza, in her role of Foreign Minister at that time. She cancelled her visit to London, just two weeks before the event she was due to attend, reportedly for fear of being arrested.