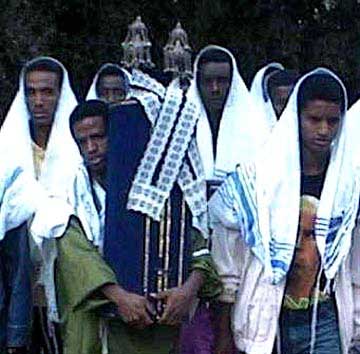 A group of 175 Ethiopians who claim Jewish heritage arrived in Israel on Monday, with the intention of becoming citizens of the Jewish state.A second group made up of another 175 Ethiopians, known as Falash Mura, are expected to arrive on Tuesday, Jewish Agency spokesman Michael Jankelowitz said.

The new immigrants will be sent to the 21 Jewish Agency ‘absorption centers’ in Israel that deal with Ethiopian immigrants upon their arrival.

In 1984, Israel began bringing Ethiopia’s Jewish community to Israel under the Law of Return, which guarantees citizenship to all Jews. That project was mostly completed by 1991.

But the Falash Mura are not considered Jewish under the faith’s strict rules because their ancestors converted to Christianity, in the 18th and 19th centuries.
Some have relatives within the Ethiopian Jewish community living in Israel, but they are not eligible to join them under the Law of Return.

In order to successfully emigrate to Israel, they must prove they have a matrilineal Jewish heritage, and agree to convert to Judaism within two years of arriving here, Jankelowitz said.

Israeli governments have authorized the immigration of some 11,000 Falash Mura. Those arriving Monday and Tuesday are the last members of a group of 3,000 who received permission to come to Israel two years ago.