For The First Time, PLO Mission In DC Raises Flag Outside Office Building 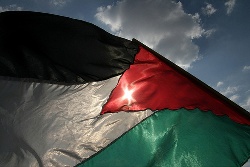 “This is a historic day”, Erekat said, “I will remember it as long as am alive”.
Palestinian government spokesperson, Dr. Ghassan Khatib, stated that this step comes several months after the United States decided to raise the level of Palestinian representation in Washington.

Khatib added that raising the flag at the representative office in DC, is similar to moves made by several countries around the world, especially in Europe.

On Monday, Russian President, Dmitry Medvedev, reaffirmed his country’s commitment to an independent Palestinian state, and added that Russia is committed to this recognition that was first made in 1988.

The wave of recognition is expected to continue while Middle East peace talks remain in a deadlock due to Israel’s ongoing settlement construction and expansion, ongoing home demolition and violations in Jerusalem, and ongoing invasions and attacks in the West Bank and the Gaza Strip.