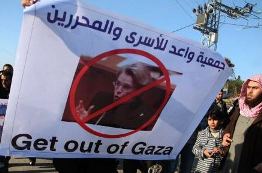 After the French Foreign Minister, Michelle Alliot-Marie, arrived in Gaza two days ago, a number of protesters hurled eggs and their shoes at her vehicle in protest to her statements regarding the captured prisoner-of-war, Gilad Shalit. She returned to Egypt on Saturday, January 21.In Egypt, Marie is expected to hold a meeting with Egyptian President, Hosni Mubarak, and Foreign Minister, Ahmad Abu Al Gheit.

The protesters in Gaza took off to the street following her statements demanding the release of Shalit, and demanding Hamas to allow her to visit him in the location where he is held.

Israel and its allies were never able to pinpoint the location where Shalit is being held since he was kidnapped in mid-2006.

Around twenty persons started pounding at her jeep just outside the Red Cross in
Gaza City where she was visiting, and hurled shoes and eggs at her jeep. Following the incident, Alliot-Marie headed to the French Cultural Center.

Gilad Shalit, who was in active military duty, was kidnapped by Palestinian fighters who infiltrated into an Israeli military base, near the Gaza border; two soldiers and two fighters were killed in the attack.

Israel carried out a number of wars against the Gaza Strip under the guise of freeing Shalit, and halting the firing of homemade shells from Gaza into adjacent Israeli areas. None of the military actions carried out by Israel where able to get Tel Aviv closer to Shalit, or even to grant Israel is small idea on his whereabouts.

Several mediators tried to negotiate a prisoner-swap deal, and the resistance also presented a list containing the names of detainees to be released by Israel in exchange for releasing Shalit, but Israel rejected the release of dozens of detainees specifically named by the resistance.