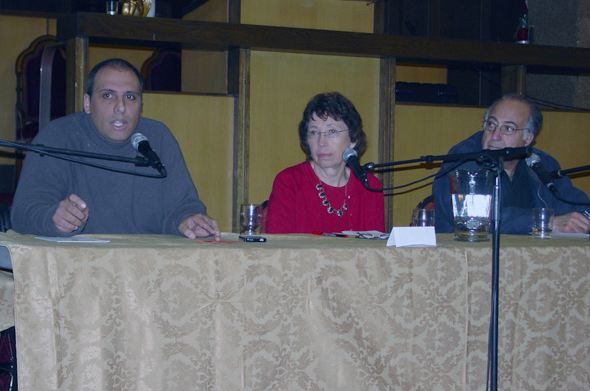 Comparisons are made between the struggle in Palestine and the civil rights movement in the United States.

The film was screened at the First Congregational Church of Oakland on January 7th, 2011. After the film, a panel comprised of three people from Palestine and the U.S., whose faiths and activism mirror that of those in the film, spoke about their own personal experiences and the ongoing struggle against the Israeli occupation of Palestine. Full audio of the speakers is included below.

The screening and panel were organized and MC’d by Emily Wheeler, who introduced the panelists and concluded the event by fielding audience questions for the speakers.

Nabil Wahbeh was born in Jerusalem, lived through the 1948 and 1967 wars, and is now active in the U.S. working to bring justice and peace for Israel and Palestine.

Anna Rogers is an American and has traveled to the West Bank and Gaza in the last few years. She has worked with Jewish Voice for Peace and other groups.

Saed Bannoura is a journalist and editor-in-chief with the International Middle East Media Center (IMEMC) who was raised in Bethlehem and was paralyzed in 1991 during the First Intifada when he was shot by an Israeli Defense Forces’ death squad.

Please sote that the audio quality significantly improves as the second speaker is introduced, about 35 seconds into the recording.