Army To Confiscate 600 Dunams Near Hebron 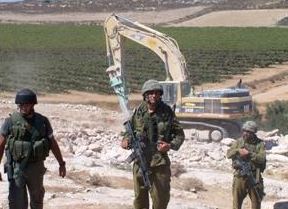 The Israeli army informed the Beit Ummar Municipality, north of the West Bank city of Hebron, that has decided to grab 600 Dunams of Palestinian land in order to use them for constructions that would benefit the illegal settlement of Gush Etzion.The so-called Civil Administration Office, that runs under Israeli army control in the occupied territories, handed resident Mahmoud Ayyad Awad a military injunction informing him that 400 Dunams of his land will be taken away.

The remaining 200 Dunams belong to several residents of the Abu Ayyash al-Allami and Sabarna families.

According to the order, “an educational facility” that belongs to Gush Etzion illegal settlement bloc, will be built in the place of the confiscated lands.

Beit Ummar is one of many villages that lost thousands of dunams for settlement construction and expansion in addition to military camps installed in the area.

Last Friday, Israeli settlers shot and killed one youth in Beit Ummar and wounded several others. The youth was identified as Yousef Ikhlayyil, 17.

Ikhlayyil was shot after over 150 settlers invaded the village of Safa near Hebron, and clashed with the local residents.

During his funeral, Israeli soldiers fired teargas bombs at the protesters wounding at least fifty.