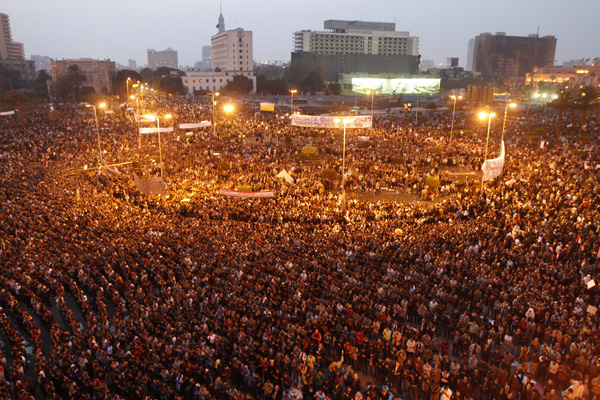 Hundreds of thousands of Egyptians filled the main square and surrounding streets in Cairo Tuesday, in response to the call for a ‘Million Person March’ to challenge the regime of President Hosni Mubarak, who has been in power since 1981.Protesters held up shoes, as a symbol of their desire to kick out the current regime (the shoes are a reference to Iraqi journalist Muntadar al-Zaidi, who was jailed by the Iraqi government after throwing his shoes at then-US President George W. Bush in protest of the US occupation of Iraq). Many held hand-lettered signs in English and Arabic calling on Mubarak to step down immediately.

When President Mubarak appeared on Egyptian television Tuesday evening and said that he would not seek re-election in November, protesters booed and hissed, saying that Mubarak should resign immediately, and not wait til November. In his speech, Mubarak told the nation that it was not the protests that had caused him to not seek re-election, but a personal decision.

Tuesday’s massive protest was organized without the use of the internet, as the Egyptian government cut off access to the internet inside the country since Friday. But protesters spread the word using more traditional means: word of mouth and fliers.

While Western media reports have focused on the Muslim Brotherhood, and what it would mean if that party won an election in Egypt, the people on the streets say that they are from every political party, faction and belief, and do not represent any particular ideology. Many protesters told reporters Tuesday that their common thread is opposition to the corrupt, despotic regime of Hosni Mubarak, and a call for the Egyptian President to immediately resign. One protester seemed to capture the spirit of the crowd when he told a Washington Post reporter, ‘I’d rather lose my life than keep on living this way.’

The protests in Egypt, which began last week after a similar popular uprising in Tunisia forced that country’s President to resign, show no signs of letting up as they enter week two. This is despite a lack of food and resources in the capital, with the nation’s economy at a standstill and workers on general strike.

Although the Suez Canal remains open as the main avenue for oil tankers from the Persian Gulf to deliver oil to Europe and the US, Reuters news agency has reported that cargo operations at Egypt’s Alexandria and Damietta ports have come to a virtual standstill. Since Egypt is the world’s largest importer of wheat, the shutdown of the ports could lead to a shortfall in basic foodstuffs in coming days.

Despite the deprivation, people across Egypt say that they will remain steadfast in their commitment to oust the current regime to end what they call an era of poverty, ignorance and corruption.